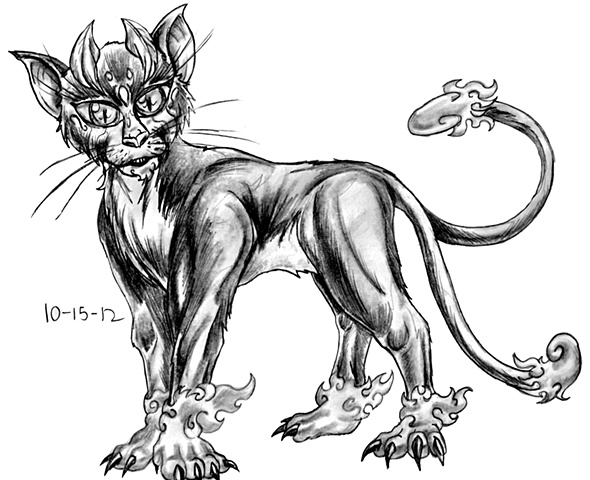 That darn cat, the Nekomata.

A type of yokai in Japan, where legend has it, that should a cat become horribly mistreated up until their death or a cat lives for over 40 years, their tails split in two, capable of growing in size, able to walk upright, and the cat gains supernatural abilities. The Nekomata is said to bring about misfortune to its abusers and also possesses the power of necromancy. Yes, this cat demon can raise and control the dead.

The Nekomata's course of mischief ranges from starting fires to having their abuser's dead relatives visit their homes. Interesting, the nekomata is actually a lower form of cat demon, the ascended form of a cat demon is the bakeneko, which possesses powers and abilities akin to a kitsune (fox demon) and is th good fortune cat you often see in Chinese shops.

For my version, I draw heavily from a nekomata called Kuro from the manga/anime Blue Exorcist, I just added a more flame like tendrils to its paws and the tips of its tails.