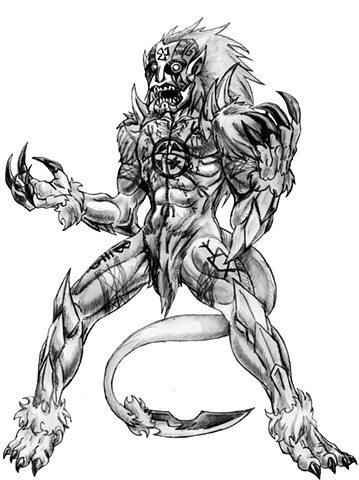 Grendel is one of three enemies in the epic poem, Beowulf. In the story, Grendel is disturbed by the noise caused by the patrons within the mead hall, Herot. Enraged, Grendel storms into the mead hall, killing and eating anyone he comes across for three years, I believe. In dire need of aid, King Hrothgar summons the hero,Beowulf, to help deal with this threat. As no mortal weapon could harm Grendel, Beowulf takes on the creature with his bare hands and engages in a fierce battle with the beast, until he delivers a mortal blow by tearing off his left arm.

Grendel later dies in his swamp lair, where Beowulf goes to kill Grendel's mother and deliver Grendel's head to Hrothgar.

Grendel's motivations are that the noise of the mead hall cause him great distress, while also during the battle with Beowulf, Grendel sought out Hrothgar's throne, yet failed to sit in it due to being"protected by a God" so, Grendel also has an additional motivation of greed and/or revenge over the denizens of Herot.

Grendel's description is never truly clear, as the poem never gives Grendel much description other than as a terrifying monster that is descended from Cain, The Biblical first murderer. The poem, itself, is often studied and analyzed for its historical and literary significance, but we are here to talk about monsters, so let's get to my depiction of Grendel.

I wanted a feral and truly monstrous look for Grendel, so I gave him the spiked forearms and knees, while adding tufts of fur around the wrist, ankles, crotch, and shoulders. I made his head look like its a hardened shell on its head, like the Hollows from Bleach. This was an attempt at utilizing a cursed family line as he is a human trapped within this helm and serves as his legacy of his cursed bloodline.

I implemented Nordic runes and symbols on him as a way to explain his invulnerability to weapons by crudely spelling out in the runs " No Man' Weapon Shall Harm Thee" while combing the symbols of a Shield and the Helm of Awe as his chest emblem. The tail was a last minute addition as I figure he could use it to impale his victims and drag them towards him.