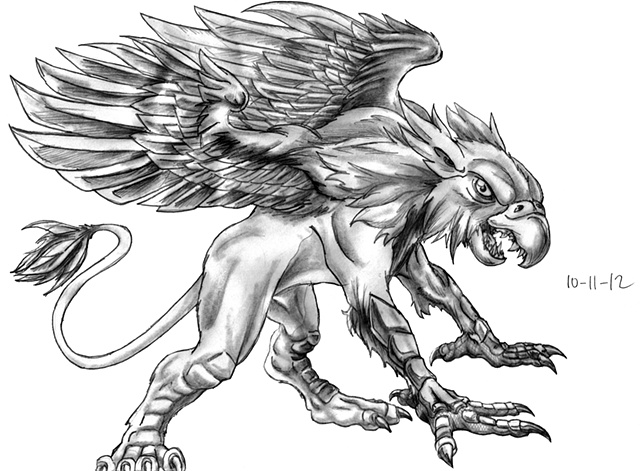 A regal hybrid, the Griffin.

Based on the idea that the lion is the king of the land and that the eagle is the king of the air, The griffin is a creature that has the head, wings and forelegs of an eagle with the back legs and body of a lion. The griffin is believed to be a majestic creature that is king of creatures and guardian of priceless treasure and/or artifacts. They are also said to be eternally loyal to their mates and should one die, their partner will not seek out a partner for the rest of their lives. Their claws are believed to possess healing properties and their feathers are said to restore sight.

The griffin is traditionally considered Greek, but its origins travel as far back as Ancient Egypt with slightly different features, like a lion's forepaws instead of an eagles and often having long ears. However many cultures have adopted the griffin for various symbolic meanings. But their are a few variants to the griffin with different names like; hippogriff (eagle/horse), opinicus (head/wings of an eagle, whole body of a lion), and the alce/keythong (wingless griffin).

In Greece, the griffin is considered a protector from evil, witchcraft and secrets. In European culture, it served as the Church's idea of remarriage and symbolic of Jesus, as it is both earthly and divine. In Heraldry, the griffin is a symbol for courage and boldness, as well as a symbol of strength and courage in the military. They are one of the most common creatures used in architecture, literature and media and still serve the basic gist as a powerful guardian for whatever role it is placed in.

My depiction stays pretty true to its description, save for adding fusion aspects to the griffin. Like placing teeth within its beak, adding the ridges of an eagle to the lion hind legs, adding tufted ears on the eagle head, and feathers within the lion's tale.