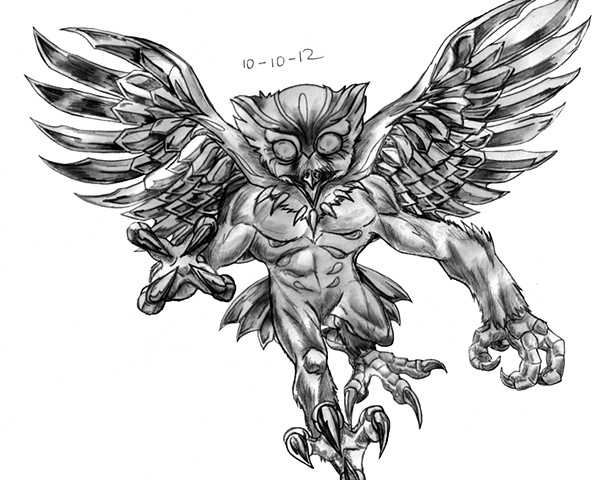 A terrifying Strix, The Kikiyaon.

Called the Soul Cannibal by the Bambara Tribe of Africa, the Kikyaon is described as a huge owl-like being, particularly in the head , where it possesses large teeth and wields sharp talons that are akin to a steel blade. The Babara people also describe it as possessing wings that have sharp spurs that it uses to cut down its victims should the talons not be enough. The are said to possess short gray, greenish feathers and smell like a dead snake that's been out in the sun too long.

The Kikiyaon is a terrifying creature due to it being an ambush predator, as it uses stealth to hunt its prey, and then with a terrifying screech that sounds like a strangled throat as it swoops down upon its victim, tearing them apart. It is also said that should one evade a Kikiyaon, they will still die due to illness or shock after encountering it.

My design of the Kikiyaon is that of a humanoid owl, while adding extra detail to the wings and talons to give them a metallic hint to complement its sharp talons and wings. I actually had to reference owl wings and talons so I can get them just right while playing around with the Owl head of the Kikiyaon. I originally was sketching it out as a bit mechanical with a ethereal flame emanating from its maw and neck, but dropped all but the wings and head concepts to make a more organic creature.