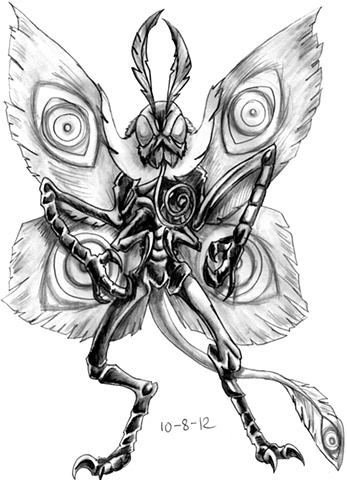 The Harbringer of disaster, the Mothman.

This creature is a popular source of supernatural phenomenon in the town of Point Pleasant, West Virginia.

Sightings began in1966, when a couple driving home spotted a "large white man with glowing red eyes and huge wings," when they drove by a former WW II munitions area called the "TNT area" . Sightings of this strange being increased over the next few days. These continued up until December, 16, 1967, when the Silver Bridge colllapsed, killing 46 people. Photos of the incident show a mysterious "dark winged shadow" flying past the bridge disaster, which prompted further speculation of the Mothman's connection to to the disaster and its moniker of foretellling disaster as many believers suggest that the Mothman is present around many modern disasters. Even the first eyewitness, Linda Scarberry, said in regards to the Mothman "It seems like it doesn’t want to hurt you. It just wants to communicate with you. "

These words, sightings, and photos have given the Mothman an identity as less of a malevolent entity, and more as a harbringer, trying to convey a message or deliver a warning in its own way.

For my depiction of the Mothman, I essentially drew a giant, humanoid moth, giving it the extra large wings with the "eye spots" and a large tail to cover the, as I later found out, the "abnormally large part hanging between its legs" aspect of the Scarberry description.