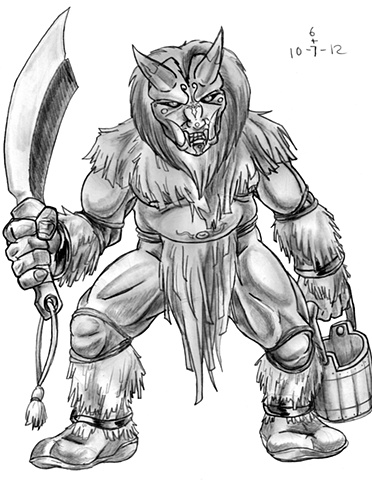 A parading boogeyman, The Namahage.

These creatures have a strong dislike for lazy and spoiled people. Hailing from the snowy parts of the Oga pennisula, their name comes from the blisters that from from one's feet when there are close to the fire for too long ,indicating a lazy person to the Namahage. The story from from Wikipedia

"A legend has developed regarding the origins of namahage, that Emperor Wu of Han from China came to Japan bringing five demonic ogres to the Oga area, and the ogres established quarters in the two local high peaks, Honzan and Shinzan. These oni, as they are most commonly called in Japan, stole crops and young women from Oga's villages.

The citizens of Oga wagered the demons that if they could build a flight of stone steps, one thousand steps in all, from the village to the five shrine halls(variant: from the sea shore to the top of Mt. Shinzan all in one night, then the villagers will supply them with a young woman every year. But if they failed the task they would have to leave. But just as the ogres were about to complete the work, a villager mimicked the cry of a rooster, and the ogres departed, believing they had failed."

In addition, the villagers, knowing that their victory is based on a lie, decided to appease the demons by holding an annual festival where they would pretend to welcome the demons to their homes. (From Yokai Attack)

There are annual festivals, usually around New Year's , where people dress up as the Namahage and would go around houses, looking to punish lazy children and to bring good fortune by instilling values into the children to behave or else, they will be punished by the Namahage.

My render of the Namahage stays close to its original form, I used the costume as my basis since the region is cold, keeping the heavy furs and straw-like attire to them. I made the face more fierce, while having them carry their utensils, a knife and a bucket to have your residential child punisher.