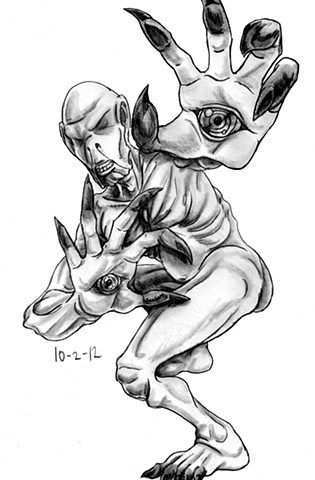 October 2: The Tenome
< previous next >

A man blinded by revenge, the Tenome.

The Tenome, also called the Pale Man, is a form of yokai that is the ghost of a blind man who was killed by a mugger. He arose as a spirit whose desire for vengeance was so great, that his blind eyes disappeared from his face and he grew new, seeing eyes within the palms of his hands. He wanders around villages and towns, waving his hands around to see, to find his killer. Unfortunately, being blind made the Tenome unable to see who his killer was, so the Tenome murders anyone his eyes catch sight of, so in a sense, he is both literally and figuratively still blinded by his anger/ need for revenge.

Now, to get the most obvious part out of the way; If the appearance and eyes for hands look look familiar to you, then congratulations! You saw Pan's Labyrinth. The most scariest part of the movie was the appearance of the monster known as the Pale Man, who it would seem, is a Japanese spirit visiting in a Spanish movie. So points to those who recognize him.

Not much to say regarding his design, as I basically just did a rendition of Del Toro's version of the Tenome with my stylistic choices.