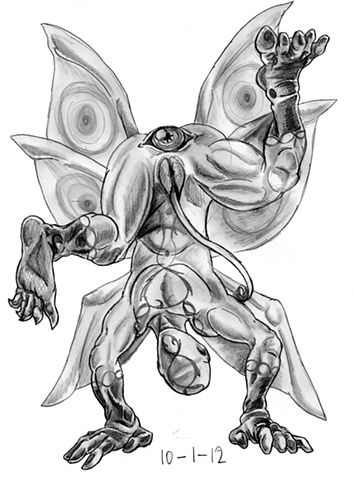 The Shirime is from Japan, from a race of supernatural entities called Yokai. This yokai has the faceless features of the Noppera Bo with one difference, it has a giant eye located on its anus. This distinguishing trait is what the Shirime employs to spook or startle any travelers, as per the modus operandi of most Japanese ghost stories, like the "Two Guys walk into a bar" joke for the West. The Shirime's story goes like this from Wikipedia;

"Long ago, a Samurai was walking at night down the road to Kyoto, when he heard someone calling out for him to wait. "Who's there?!" he asked nervously, only to turn around and find a man stripping off his clothes and pointing his bare buttocks at the flabbergasted traveler. A huge glittering eye then opened up where the strange man's anus should have been."

When designing the Shirime, I played around with the basic template of my drawing of the Noppera Bo, with some changes. Aside from the Anus Eye, I made the cloaking wings also have the "Big Eye" patterns from moths to actually make its reveal all the more terrifying. And in place of genitals, I added a moth's proboscis to amp up the creep factor while posing it in a handstand. The circular pattern was a stay over from my first go through of the Shirime, and I wanted to keep it present in parts of its body.