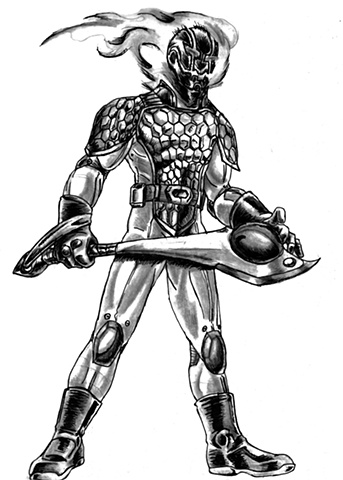 El Cuco: mystical superhero Story: Rafael Velasquez comes from a long line of brujos and brujas, who once making a contract with the Natural Spirits of the Island, are endowed with supernatural powers to defend the Island from threats both spectral and mundane. As the latest family member to earn the title of Brujo, Rafael felt these great powers could be better served to aid the world. While fighting to stop a child slave ring run by the Sack Man, El Cuco ended up working with the 5th El Boriken in apprehending the Sack Man. Impressed by his skill, El Boriken offered him a spot on a the Latin American Alliance’s newest venture, the development of a super team dubbed Los Superiors. Though his family looked upon the task as shirking the responsibilities of their family line, Rafael promised that by aiding to make the whole world a better place, he in turn makes protecting the Island and its spirits. After a communal with the Nature Spirits, who too, saw this as beneficial to the Island, allowed Rafael continued access to their powers while away from the island. With the cover of a tech based, scientist to not cause an uproar with the general public, El Cuco became a stalwart operative who is by default, second in command the team. When the 5th died at the hands of La Sayona, El Cuco was the only operative able to subdue her and calm her frenzy. When Luis Mendez becomes the 6th El Boriken, El Cuco took it upon himself to ensure that this one stays alive as long as possible. Abilities: El Cuco is a trained sorcerer, capable of casting spells of both defensive and offensive variety. He draws powers from the Nature Spirits of Puerto Rico he made contracts with that bestow upon him various abilities. These abilities include; flight, energy blasts, protective shields, receiving aid from familiars, elemental manipulation, restoration, sealing, summoning, and exorcising. El Cuco’s fiery face is rooted in his access of the Natural Spirits as a visual representation of his contract with the Spirits. El Cuco’s main weapon is his Foci, a stylized warrior’s club where El Cuco casts both his spells and serve as an offensive weapon. His utility belt contains items to aid in spell casting and practical aid. These items include; chalk, small notebook, vials of herbs, medical kit, pre-drawn summoning circle, smoke bombs, flashlight, and other items depending on the situation. El Cuco wears a ceramic plate tunic, warded to protect from practical and mystical weapon attacks and a Protective jumpsuit made of a Kevlar-Nomex weave for further protection. Both El Cuco’s boots and gloves are made of specially treated leather that enhances El Cuco’s spells and allow him to touch supernatural entities such as ghosts. Conception: The character came upon me challenging myself to create heroic or villainous personas of mythical beings, and El Cuco’s design draws heavily from Nighthawk from Superme Power from the tunic design. The should pads were a design that I developed over time as well as dropping elements of El Cuco, as I initially was giving him tortoise patterned forearm guards and shin plates with the shoulder plates going over the tunic instead of under as the final image shows. The war club is based mainly from Sokka’s club from Avatar: The Last Airbender, as well as having cultural meaning from ancient weapons. The fiery head and tunic titling were the elements I preserved from my development of the character.