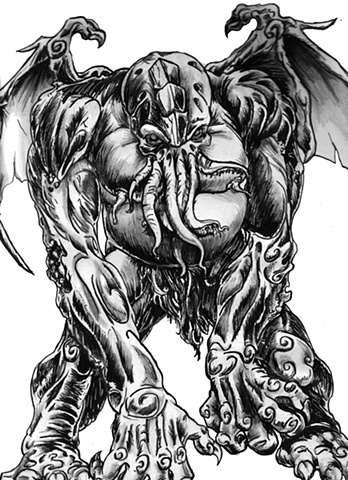 “in his house at R’lyeh Dead Cthulhu waits dreaming.”

Cthulu is a malevolent, amoral water being that resides within the underwater city of Ry'leh, where its slumber is the source of all subconscience anxiety for mankind and whose existence is worshipped by many cults. This is also one of the most famous of a pantheon of Cosmic beings called the Elder Gods or Old Ones whose sheer presence can drive the human mind mad. These beings existed before the Dawn of Man and The description of Cthulu is that of a combination of octopus, a dragon, and a caricature of man with a grotesque and scaly body with crude wings. The story goes that while Cthulu remains trapped, it will eventually rise from the ocean and with it, an apocalypse.

From the short story, Call of Cthulu, chronicles the readings of investigators and explorers as they uncover the various cults and in one unfortunate naval voyage to the infamous coordinates, 47°9&#8242;S 126°43&#8242;W, come upon the city of Ry'leh and unintentionally, releash Cthulu to the world. How it ends, well you'll just have to read the story.

But overall, Cthulu is the most popluar and often depicted Old One in pop culture and the coordinates listed in the short story have a strange phenomenon where in 1997, a stange "bloop" sound was heard deep within the Pacific Ocean around similar coordinates where scientists still haven't dechipered it, which many a fan has said is proof of Cthulu sleeping. Whether or not this is true is for another subject.

"That is not dead which can eternal lie, And with strange aeons even death may die".

When I wanted to make up for the number of creatures lacking from my first year of my Monster Challenge, I did all but one. Of the make ups, I did the Ushi-Onna, The Allu, and the BasCelik, and the last one I immediately had Cthulu in mind, but I wanted a very grotesque depiction that most Cthulu artwork references I personally found to be somewhat lacking, until I came across one piece by Chris Lazzer that I felt was tremendous depiction of Cthulu and I used that piece for my main reference for my depiction of Cthulu.

I sat on drawing this being for a while, until I just drew it up once at the Chicago Drink and Draw social club and I liked it so much, I kept at it. For inking, I originally was using microns, until Tim Seely handed me off one of his brush tip pens to use and I began to apply it for a lot of my shadows. For Texture, I've been receiving inking tips from Tom Kelly that used tools such as the brush pen, but also a white gel pen, that I used to add more texture to the skin and hair areas, while adding a Correction pen to thin out or shape sections of the drawing to get the finished result you see here. Just not a complete scan, as I only have and 8X11 scanner and the picture was 9X12, so his full wings and feet are cut off, but overall a well done piece if I do say so myself.