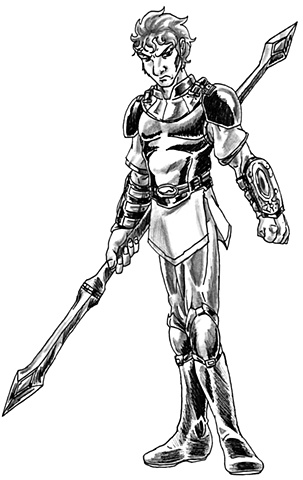 One of the least trustworthy individuals on the Council, Dama.

Dama came from one of three main Houses that represent the Celestial Guard, House Damael, House Delael, and House Dylael. Dama was childhood friends with Dyl and Delana, even having a romantic rivalry with Dyl for Delana, ultimately losing out to Dyl. For a man used to getting what he wants, this did not please Dama, nor did it please him to be passed over in military ranking to Dyl. From then on, Dama sought to seek power for himself and only himself. During Lemithian Civil War, Dama was secretly pleased to see House Dylael fall, and was first in the militia to raze it to the ground. After the War and when Ikhalen became king, he appointed Dama a seat at the Council, yet Dama had much bigger aspirations than being a Council member and he has set such plans in motion, for Dama wants a greater prize, the Throne itself.

Dama is another character who received little modification, just additional details, such as more detailed boots and bracers, the additional of a gorget and shoulder pads on his leather armor, and the most drastic change, his weapon. In the original work, Dama wielded a dual-bladed spear with blades that look akin to butter knife blades. Since Dama looks distinctly Roman, I mad his dual-bladed spear more akin to Roman javelins in terms of design and, am actually content with it.