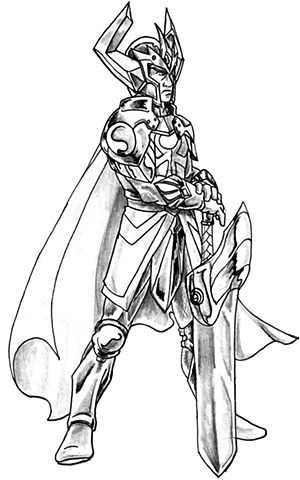 A noble knight who is the first to fall, Chalrae.

One of the Sovereign's Original Twelve Council Leaders, Chalrae fought alongside Lhor Cardemyall to maintain the the union of Lemithia during its civil war against Rawni and his armies. The war left Chalrae a tired and embittered veteran, who tries to uphold Lemithia's laws and honor, yet loses himself whenever he encounters anyone bearing the Rawni sigil, as he views him and all who support him as the source of Lemithia's upheaval.

Chalrae meets his end at the hands of the new aspiring ruler, Pakhawaj, in the Battle of Paradune, thus ending one of Ikhalen's strongest supporters.

Chalrae went a full 180 in redesign, where I keepseveral details from his former design and altered others, making his outfit less science fiction and more of a medieval style, particularily making his helmet look less like a decorative crown and more like a majestic battle helm, losing the form- fitting attire and making him look a watchful guardian, like Heimdall of Norse mythology. He originally wielded a lance, but I changed it into a heavy sword for ease of use andfor his redefined role in the Rawni Universe.