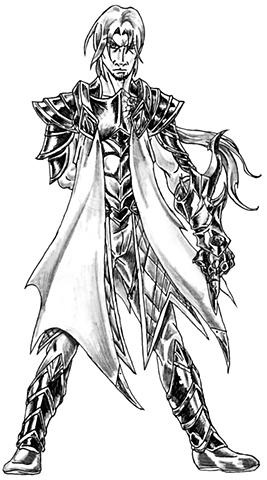 The ruler of Kalon, Oscuros Amonrae.

Once, he was one of the Sovereign's Original Twelve until who was respected for challenging and question decisions, as he was needed to ensure all was fair. This man was called Rawni.

It wasn't until the Sovereign's disappearance did the seeds of war begin. Rawni felt he is most fit to lead, but Lhor Cardemyall disagreed, and the Lemithian Civil War sprang from it. This led to the dissolution of half of the Original Twelve and afterwards, Lemithia went from a united land into several separate kingdoms, with Rawni founding the land and kingdom of Kalon and proclaiming himself its leader and changing his name from Rawni, as he felt it shall now stand for the idea of individuality, into the name and title of Oscuros Amonrae.

Oscuros possesses abilities as a member of the Original Twelve which include an extended lifespan and preternatural abilities. He possesses a powerful telepathic mind and slight telekinesis, which made him proficient in his weapon of choice, throwing blades.

His outfit I revised extensively, yet kept several core aspects of his look. His original armor had dragon aspects, which I made more so in his armor and changed his outfit as it originally looked more casual than majestic, which is why I changed parts that were leather into armor and made the coat that was attached to his claws into a winglike style with dragon claws adoring the attire. I kept the holes in his chest plate as it was an essential story point and added some character to him. I actually accidentally drew his left arm without his special gauntlet, and had to digitally mask it over with the gauntlet over his hand.