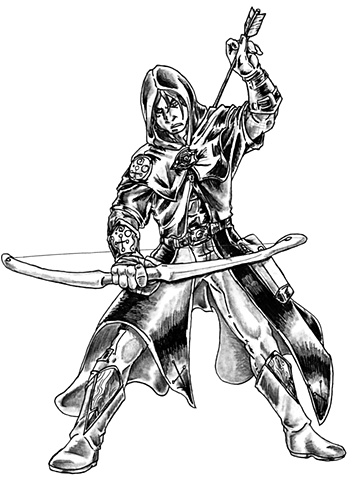 Born of the proud Dae family, Lhor Daesun was born into privilege and grew up in lavish splendor. His father, Dae, was one of the Original Twelve Members of the Sovereign's Council and he ran a series of monasteries that share the Gospel of their faith. It wasn't until the Lemithian Civil War that Daesun was uprooted from his homeland and lived in less than stellar conditions when his father chose to side with the Separatist Rawni faction over Lhor Cardemyall's Lemithian Order. Though no longer at his former home, Lhor Daesun still lived well, as the monasteries still operated and served as secret rally points and sanctuary for all rebels.

Daesun was also close to his father, Dae, and learned to be a leader like his respected father, yet Daesun has a lot to learn in controlling his temper and his impulsive mindset. Until then, Daesun was not able to lead a unit of his own, yet was being groomed to take command of his father's when the time came, and was gaining team experience by being in the Pakhawaj Clan.

His father's death in the Battle of Paradune not only served as Daesun's motivation in becoming a leader, but was the moment that compels Pakhawaj to turn on Oscuros and forgo the nation of Kalon to start a new nation, with Daesun's help. Though Daesun is now the benefactor of his father's work, he knows he needs allies in Clan structure of Kalon, as well as finding the soldier who killed his father and fulfill his desire for revenge to honor his father's passing.

Lhor Daesun was the most revised character of the group, as his original outfit was essentially wearing the tattered remains of his father's robe with armor underneath. This time, I took care into making him his father's monk robe, but remaking it as a split center cloak while retaining the monk robe features. I redesigned Dae's insignia to not only tie into Pakhawaj's symbol, but also to make the original look more uniform than its prior incarnation. I made him an archer as that was what his former design was, and made his outfit show not just a ranger, but also princely in that it looks more high end than the other character's uniforms.