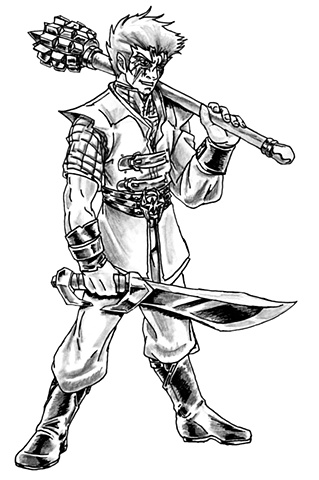 The surveyor and tank of the group, Baredun.

A sellsword with a half-blood heritage, Baredun was a powerful and vicious fighter who was recruited into Pakhawaj's unit as he saw a use for his combat skills, as well as his unique optical ability. Baredun's eyes are capable of seeing from long range to microscopic detail due to his unique control over his iris and pupil, which have a star-like appearance. His scarred eyes are a birthmark from his bloodline as it was debated whether he was vampiric or demonic in heritage.

The character was initially a one-dimensional savage, but would have been fleshed out further as the story went along to better portray the man the character was based on.

My redesign or Baredun was in using aspects of his former look, which riffed off of Kane from WWE in the buckles, and giving them a more medieval, slightly Arabic look. A torked sleeve reveals a padded jacket underneath while his belt buckle I combined the Red Lantern logo with the star pattern in his eyes. For weapons, he originally had a gunblade, which I dropped in favor of giving him a falchion, a sword meant for chopping, and a warhammer to show that he favors a more bone crushing method of combat. His hair style was also changed from straight spikes to a more wavy look. I retained his grin as it shows a character who looks forward to testing his skills out onto the battlefield and looks forward to the next fight.