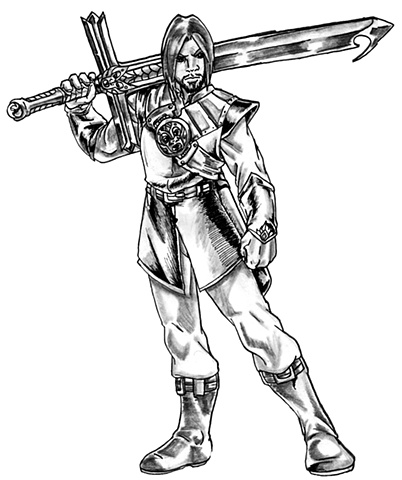 The number two to Pakhawaj is Dyl

A former Lhor (Lord) of House Dylael, Dyl was forced to flee his home as it burned down, along with losing his father, Dylael, during the Civil War within the Sovereign Kingdom of Lemithia that splintered to realm into various kingdoms, and was raised in the newly formed realm of dissidents called, Kalon.

The only family heirloom Dyl possesses of his previous nobility is the family sword, simply called Dylael. Before the fall, Dyl had two close friends called Delana and Dama, who they all would play and train together, eventually causing a love triangle between the three as well as their eventual rift, as Delana chose Dyl, with Dama resenting Dyl to this day.

Dyl became Pakhawaj's commander with the proud Pakhawaj needing a strategist, as well as promising him a restoration of his legacy. Dyl and Pakhawaj became fast friends due to their mutual desire for change and the drive for a better world.

For this design, I fully redesigned Dyl's wardrobe, as his previous looks were very slap together and inconsistent, as his character was essentially a blank slate for most of the series, until I got to know the person the character is based on, giving me an idea behind his look.

I drew on both Jon Snow and Ned Stark of Game of Thrones for his outfit, while placing a new emphasis on his sword's hilt. The sword was one of the longest, most frustrating weapons I worked on as the hilt was revised constantly to ensure all the points worked. The sword was bastard sword with hooked end at the blade while the hilt had a sad face with pointed wings and a jeweled pommel.This version of the sword retained the main face, which I call the King of Tears, this time with a crown to tie into the Dylael legacy, and a handle built within the blade for speed in counters, while the swords scabbard had a strap with the King of Tears crest as the buckle. I ditched the wings and gave it a simple hilt, but attaching it to the main face giving it an extension of the main face.

His outfit I kept fairly basic, yet added unique touches to his tunic and bracers.