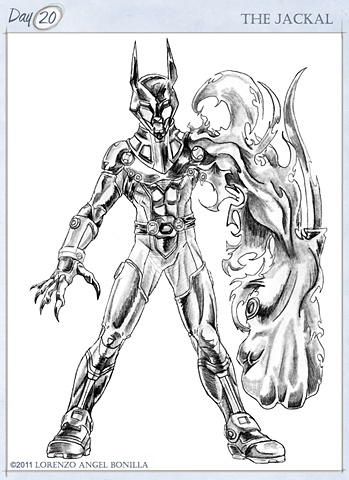 A technological cultist, The Jackal

Once a former Loman Field Agent, Farwed Zachari came upon the Heliopolis Society and instead of preventing their operations of stealing one of the recently discovered Emerald Tablets of Thoth, assisted in their escape and killed two of his comrades. Now a member of the Heliopolis Society, Farwed was placed within the Order of Set and donned the guise of Set's son, Anubis. As Agent Anubis, Farwed raided and stole experimental equipment from the Loman Institutes Research Labs and became the Heliopolis Society's top agent.

Farwed began to take on contract work on the side and gave himself the handle , The Jackal, as a nod to his membership with the Heliopolis Society. Farwed's biggest crime was the attempted highjacking of the Loman Organization's top airship, The Abraxis. Though the Loman Organization's personnel were successful in fending off the invasion, The Jackal still eluded capture and is still in possession of classified experimental tech.

Abilities: As a former Loman Agent, Zachari is knowledgeable of occult and ancient cultures, while trained in weapons and hand to hand combat. As a member of the Heliopolis Society, Zachari has expanded his knowledge in all aspects of the occult, while under the Order of Set, Zachari now possesses knowledge of black magic, particularly death curses.

In addition to mystical talents, Zachari possesses a prototype nanotech/memory cloth hybrid body armor with a neural interface that enables the suit to shapeshift into components to aid the user. These abilities also include a stealth mode and physical enhancements that make The Jackal an imposing threat.

Creation: Initially, The Jackal was going to be a tiger themed villain for a superhero comic, but once the project was abandoned, I set about in reworking the look. I came up with the Jackal idea and was setting him up as a street level foe, with a Ghost Rider spiked biker suit and chain belt. Then when working on the Loman Organization, I figured a way to implement him via elements of the real-life Heliopolis Society, which was an antagonistic force in Dark Horse's Edward Gray comics, and my fictional Order of Set cult idea. His suit is based on previous X-Men leather outfits, with the Gantz suits being the heavy influence on his visual style, while making key areas around the suit (collar & gloves) resemble something Egyptian. I also practiced a lot on drawing that head, from every angle and from every look to nail it down. In fact, when one of my friends was making a Jackal themed character, I instructed him on designing the character's helmet based on my own experiences in drawing jackal-inspired headwear. Just wanted to make that special anecdote known.