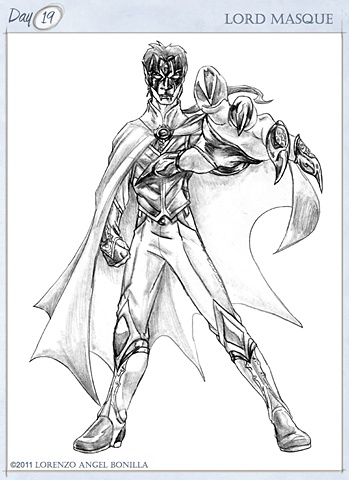 Owner of Danse Macabre, Lord Masque is the main proprietor of this gothic themed nightclub which celebrates Victorian and vampiric subcultures with exotic burlesque shows and modern industrial music, while secretly a hotspot for vampire meetings and gatherings. Lord Masque is an unabashed vampire who prides himself on cashing in on humanity' obsession with vampires while lavishing in the sheer debauchery that his club brings about.

Little is known of his true name, as he has kept that his most closely guarded secret, thoug hrumor cites him as a profound influence to Vlad Tepes and Bram Stoker, while some say he was The Ripper himself, and even more believe him to be one of the Old Ones within the Vampire Bloodline Houses. The only concret fact given is that his whole body was disfigured from an unknown encounter, and he has work protective attire for most of his undead life, with the mask being the sole remaining cover for his disfigurement.

Lord Masque uses his name as a corporate mascot, while he uses proxies and underlings to carry out his daytime activities, while he represents the "face" of Danse Macabre. To avoid an incursion with the Loman Organization, Lord Masque acts as an informant to the Organization in regards to vampire culture and in return, Lord Masque makes sure his vampire patrons do not feed on any of the human patrons under their Protectorate Accords. Though that hasn't stopped select vampires, even Lord Masque, from side-stepping such rules, which some agents, particularly Adam Mortensen, seeks to expose Lord Masque, of such wrongdoing.Until such a thing happens, Lord Masque enjoys his nights out in his club, while behind closed doors, plots to overthrow the current Vampire Houses and restore his true "Self" into prominence.

Abilities: Lord Masque is a true vampire of an ancient bloodline. As such, he possesses abilities prevalent in most vampires; such as superhuman strength, speed, and stamina. He is capable of hypnotizing through vocal stimuli, yet is vulnerable to sunlight, silver , and garlic.

Lord Masque possess a solid business acumen and is a shrewd politician, from running a niche -themed club and exploding it into a trendy hotspot while deftly preventing it from being overwhelmed from pressure on both the Vampire Houses and the Loman Organization. Secretly, Lord Masque desires to destroy all his threats, yet favors clandestine tactics over brute force.

Creation: Lord Masque was essentially just my high school idea of having a vampire wearing a mask to conceal his true identity, ala Phantom of the Opera. The nightclub idea most likely came from watching TruBlood, with Blade subtext, and thinking that a Vampire would be fairly smart in running a club that capitalizes on people's fascination with vampires and gothic subculture by running a club that celebrates it. I then integrated him into the Loman universe as being an informant on Vampire culture while still keeping a villainous undercut with him, as a clever villain is one who doesn't want to get caught.