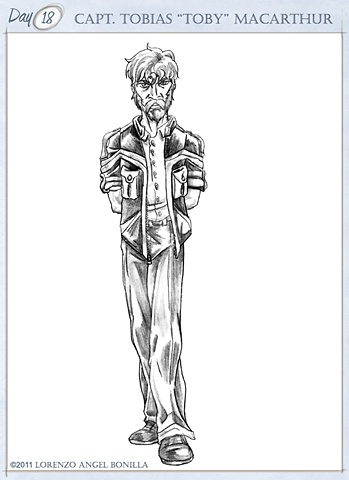 Before he was commander of Team Zeus, Tobias MacArthur served in the Navy for several years before his first encounter with the paranormal. It occurred while his ship was on port in Morroco, where several of his crew were seduced, driven mad, and killed by the female djinn, Aisha Qandisha. Tobias confronted her after she claimed her latest victim, yet she too, made Tobias the recipient of an oncoming storm of demonic and spiritual entities, until agents from the Loman Organization warded her away and saved Tobias from having his mind broken.The experience resulted in Tobias from being discharged from the Navy due to mental issues, yet "Captain Toby" was determined to prove that he was not mad. Tobias actively sought out the existence of the "Lo-Men" and eventually met with the enigmatic Arthur Loman,

From there, Captain Tobias MacArthur was hired into the Loman Organization as a Field Officer and encountered even more supernatural and preternatural phenomena, including the capture and enrollment of Walter Ramsey. Eventually, Tobias was promoted to the rank of Ship Captain and is one of the first Aerial Captains to command an airship. His ship, The Abraxis, is the Loman Organization's main mobile command center, and as such, is the first response to any and all threats or conflicts within the supernatural community. This responsibility is one Tobias bears greatly, and the lives of each and everyone of his crew affects him as Tobias never forgot what Aish Qandisha did to his crew mates, and that memory is what propels him to command his crew and bear their pains upon his own.

Abilities: Tobias uses the combined knowledge from both is time in the Navy and in Loman to command his crew and maintain order in his ship. As such, Tobias does not often engage in field operations, unless as a delegate or emissary with the various races and entities that the Loman Organization deals with.

Even so, Tobias still maintains his military exercise regiment and weapons training so that he is still fit and disciplined, even in his old age.

Tobias is a respected and capable commanding officer, as he is able to effortlessly issue commands to his field agents, discuss a pan-dimensional treaty, and conduct a guest lecture without feeling overwhelmed or overburdened with his responsibilities.

Creation: The commanding officer idea was easy, the name was the most imaginative part, as his name comes from a female friends father, who owns his ship and we call him "Captain Toby".