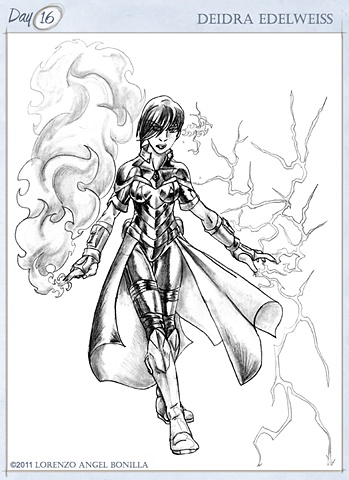 Deidra was only a baby when her parents, Diplomats for the Loman Organization, were killed during a Vampire Clan conference. She was taken in by family friends, as per her parents wishes, and raised only knowing them as her family. When her powers began to manifest, she fought to keep them hidden out of fear of her family finding out. It wasn't until she unintentionally caused a school wide blackout, that her parents figured out it was her and introduced her to Arthur Loman. Arthur introduced Deidra to other witches in teaching her how to better understand and harness her burgeoning abilities. Though she found the classes fun, Deidra still felt lonely, until she met Walter Ramsey. Walter made Deidra feel like she has a home away from home as she treated him like the daughter he never got to spend time with, and Deidra had the surrogate father/brother that she lacked while staying at the Loman Institute.

As an agent of Loman , Deidra is the second-in-command alongside Adam Mortensen for Team Zeus. She is well respected and a level-headed foil to Adam's headstrong tendencies, and one of the team's heavy hitters with her powerful, yet unpredictable elemental spellcasting. She is one of the more well-adjusted members of the Loman Organization as she balances time with the Organization and with her foster family and friends. Though strong, Deidra still carries a burden of not truly knowing her birth parents, and though she can access their files, Deidra is relunctant to find out the truth about her parents, and she is content with that fact.

Abilities: Deidra is a powerful witch whose magic proficiency is Elemental Magic. Deidra is capable of calling forth the elements in aiding her offensively and defensively, yet certain spells will yield unintentional results depending on the range Deidra casts it. For example, a close range fire wall is easy for Deidra to cast, yet firing off a large column of fire from afar will cause the fire to spin wildly and not land directly at her intended target. This is mainly due to Deidra having to channel the natural forces of nature, which are difficult to control in general.

Deidra has shown varying skills in the following elements;

Fire: Her most utilized ability. Deidra is able to cast fire spells of varying levels, from fireballs to flam tornados.

Lightning.: Her second most common ability; Deidra is able to cast bolts of lighting from her fingers to calling down a bolt of lighting to the ground.

Wind: Though skilled, Deidra uses this ability more for defense, or in combination with other elements.

Water: Deidra only uses water spells when she is in proximity to a water source, yet when she does, can create various water constructs and tidal waves.

Earth: Deidra's least used ability due to the mental exertion it causes, Deidra is capable of launching a column of stone to delivering a powerful earthquake.

Though an Element Specialist, Deidra is capable of using other spells in her field work;

Deidra is trained in Basic Combat training and adept in small arms weaponry. She possesses skills in Linguistics, Forensic Research, and in Piloting.

Creation: Deidra is one of the first two magic style characters I conceptualized in my mind for the Loman Organization. Initially, I was going to utilize a traumatic experience in her power manifestation, yet it was through Carlos's suggestion, that we made her more of a well-adjusted and self-assured character by using the Jean Grey approach to her backstory; girl's powers manifest, causes some disruption, family seeks aid for their child to a specialist. Her outfit was influenced from a cover of Runaways from Nico Minorou's dress. Her dress intially had torso pockets, and I extended the design to go over her shoulders. I included back packages for her to carry items/weapons and mini-pouches on her armbands, which carry implements for her spellcasting. I also added additional detail to her boots, as those were a problem for me in finalizing their final design.