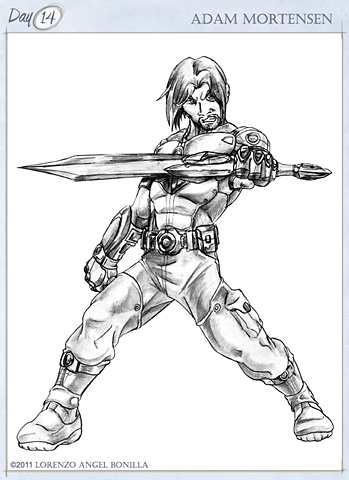 Adam was an archaeologist who was not respected in his field due to his theories on the possible existence and location of ancient civilizations and the potential of uncovering legendary artifacts. Every attempt at procuring funding resulted in him getting either laughed out or kicked out of every museum, lecture hall, or campus he sets foot in. He was apporached by one man willing to hear out his theory and finance his operation, Arthur Loman.

Adam's first major expedition resulted in the discovery and procurement of the legendary sword of Roland, Durandal, in a remote temple on the outskirts of France. This discovery not only validated Adam's ideas, but also inducted him into the Loman Organization as the leading expert in Legendary Weapons and Artifacts. Adam was also made Field Leader of Zeus Unit, Loman's main field operative force for the Organization. Since then, Adam has dealt with not only excavations and discoveries of the ancient world, but has also confronted and fought with various entities of both the natural and supernatural kind. A strong, if somewhat reckless leader, Adam is willing to put his body on the line if it means someone else won't have to, as well as for the benefit of the next discovery of the World's Secrets.

Abilities: Adam is a man who has demonstrated the strength and stamina of a man who maintains regular exercise. Adam is proficient in small and medium weaponry, yet prefers to utilize his main weapon, the sword Durandal. Adam is trained in fencing and melee weapons combat so as to wield Durandal efficiently. His swordsmanship is such that the Supernatural community has listed him as one of the most deadliest swordsman around. Adam also possess a Master's in Archaeology with specialties in Myths and Ancient Culture, along with recently acquiring knowledge in Werewolf and Vampire culture.

Durandal is a sword whose previous owners included Hector of Troy and Sir Roland, Knight of Charlemagne. The sword was in pristine condition when Adam discovered it, and its edge was still incredibly sharp. Durandal is made from unknown metals that have yet to be determined and is completely indestructible.

Due to his perchance for getting injured, Adam also wears a special suit called "Ward Wear" which is a combination Kevlar/Nomex weave top, gloves, and boots with carbon ceramic armor plates with sigil coins embedded in key areas of his suit. The coins activate a protective field when Adam is at risk of critical injury from either mystical or practical means.

Adam, so far, is the only individual who has been able to activate or utilize a mythical weapon to its full potential, as others who have attempted to wield Durandal or other items resulted in either no reaction, or severe injury to anyone other than Adam from touching it. It is unknown whether this is genetic or some other reason that makes Adam the sole wielder of said weapons. More research is required to procure an answer.

Creation: Adam Mortensen was the result of utilizing a pre-existing character design from my past collaboration with my friend, Carlos, and putting him in a new guise. During the brainstorming session, I told Carlos my idea for having a Legendary Weapons expert and that is how he came about. He was originally going to be called Adam Munroe, but the name was too similar to another Adam Monroe from the TV series, Heroes, so we both decided on naming him Adam Mortensen, after our mutual respect (i.e., man-crush) on actor and renaissance man, Viggo Mortensen. Durandal was drawn after a Gladius, as its previous owner was Hector, while using the stylings of French swords to complete Durandal.