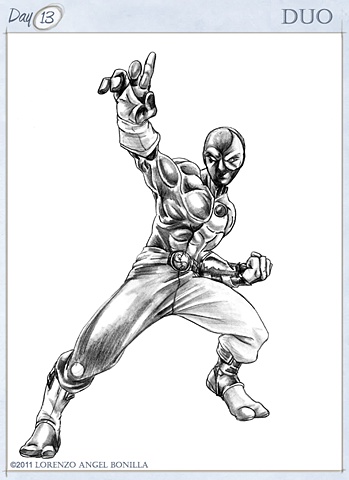 Jason Kim was an agent of the John Dee Society in Alchemy and partner to Nick Dyer. These Alchemy Agents were responsible with upholding the Rules of Alchemy and the protectors of the Philosopher's Stone Mound, located off of Lake Michigan, but it was not always so. Before Jason Kim, he was Huan Hsaing, and Alchemist during the height of Chinese Alchemy research and he was the first to tap into the Elixir of Immortality in prolonging his life. Throughout the centuries, Huan saw and experienced many great and terrible things until he was approached by John Dee in the 1550's and was inducted into the secret Dee Society, along with Edward Dyer, an English poet/alchemist, who Huan became fast friends with. The Dee Society went through many ups and downs; from Dee's research into the paranormal, the rebirth of Hermes Trismegistus and the Books of Thoth, to the civil war within the society between Dee, Edward Kelly/Talbot, and a resurrected Nicholas Flamel. These battles all centered around safeguarding and procuring the Philosopher Stone Mounds, along with Huan's Elixir of Immortality. Though Dyer never took it, Huan has consumed the Elixir as a means to protect his friend's family, for contrary to the other prominent Alchemists, Edward a successful Alchemist, able to circumvent certain rules of Transmutation and his gift passed on to his offspring, along with Edwards Philosopher's Stone as a Dyer has always been a member with the John Dee Society.

It wasn't until Nick Dyer's death that Huan, now Jason Kim, suspected any wrongdoing within the Society, but after conducting his own investigation around Nick's car accident, Jason suspects another coup is in the works within the society and he must prepare Nick's son, Alan in the ways of Alchemy, before the group that took Alan's father, come for him next.

As Duo, Jason trains Alan in both harnessing his father's Philosopher Stone, but also in defending himself in combat. He also acts as Alan's source of intel in dealing with threats beneath the Society's notice, but not for the Front Line.

Abilities: With a Philosopher's Stone embedded in his left eye, Jason is capable of creating organic and inorganic transmutations with his hands and feet via touch. His eye also accelerates his mental calculations so as to be able to make create objects quickly, as well as see the chemical composition of various objects and see various spectrums of light invisible to the naked eye. Jason is also a skilled martial artist, having mastered over 70 different fighting styles, from weapon to open-handed combat, throughout his long lifetime. Jason is also a skilled chemist and is one of the founders of the Elixir of Immortality. Jason is also an Agent of the John Dee Society and has access to their vast library of alchemy knowledge as well as their resources in determining threats that the Dee society won't handle, but can get them to Alan and the Front Line to handle.

Creation: I wanted to make a mentor type character to go with the Alchemist, as well as being a fan of stark contrast costumes, with the ying yang motif being the basis for his wardrobe. It also aids in the Taoist philosophies inherent in Chinese Alchemy, which is a happy accident on my part.