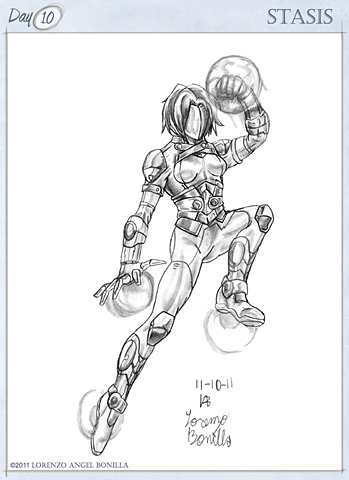 A researcher that works as an adventurer, Stasis

An advanced expert in the field of energy fields and field generation, Rebecca Styles discovered a method of creating variable spatial distortion and manipulation fields contained in the form of energy spheres. As she researched deeper into her discovery, she found that the spheres can be made to be capable of either manipulating gravity, slowing down time, and conducting energy. Rebecca was about to present her findings, when she overheard that her research team were about to be absorbed into Archangel Industries and that all focus will be used for military and weapons applications, Rebecca fled with her findings and developed them in secret at a safehouse she installed, until she saw various news networks reporting the influx of superhumans battles and the advanced tech used by many villains resembled aspects of not only her research, but of several other scientists, who have been turning up dead under mysterious circumstances. Fearing for her life and feeling responsible for the harm her tech is causing, Rebecca crafts a set of gauntlets and a portable power supply and set out to combat these tech-based villains as Stasis.

Stasis has fought several villains and has crusaded in an uphill battle against Archangel, until she was approached by both the Alchemist and Azrael into starting up a united team of superpowers to combat not just the large threats, but to aid each other into their respective personal battles. Stasis was intially hesistant as she views herself more of scientist than crimefighter, but was eventually swayed into joining with help from Azrael's own personal feud with Archangel and the Alchemist's own deal with the Loman Organization in consulting.

Now going by the name Ashley Howell, Rebecca is under the protection of the Loman Organization, working as a lab consultant for their airships and teleporters while operating as one of the founding members of the Frontline.

Abilities: Rebecca/Ashley's suit is designed to project and manipulate various energy fields in the form of spheres that range in the following types:

Gravity: Alters the density of gravity enabling flight or dense enough to as crushing melee bursts.

Time Distortion: Able to slow down or accelerate the speed of any object contained within its sphere of influence.

Rebecca/Ashley is a skilled scientist in technology and particle research while possessing a moderate degree of hand-to-hand combat experience.

Creation: The character was designed as an aid to include a strong female character and her look was initially inspired by Wally West Flash Villain, Magenta, until I added the visor faceplate and redesigned her look to incorporate the gauntlets and a power bracer around her waist. The pose I got from referencing Storm on the X-Men.