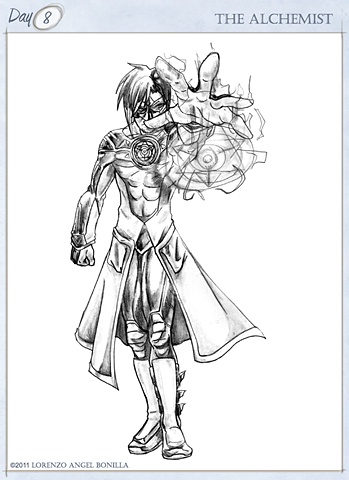 Alan Flamel Dyer was about to start his Graduate Program in Chemistry at UIC, until he received some horrible news; his father, Edward Nick Dyer, was involved and killed in a car accident. At the funeral; Jason Kim, a close family friend, revealed to Alan that his father was more than just a civil engineer, he was also an Alchemist, part of a secret order of mystics who enforce the Rules of Alchemy and safeguard one of several mounds known as the Source Stone, where the ancient Philosopher's Stone is forged.Initially dismissive of this revelation, Alan soon discovers that truth, is indeed stranger than fiction as he discovers the great and terrible responsibility of wielding the powers of a God.

After a length of time as a hero and dealing with other factions within the John Dee Society, Alan realizes the importance of "strength in numbers" and takes steps into forming the first public team called The Frontline. To secure funding, Alan has procured financial and technical support from the Loman Foundation, a public charitable and research organization that also operates as the chief paranormal and extraterrestrial peace keeping organization. In exchange, Alan's team will include a couple of the Loman Organization's members as part of their team and Alan will provide his consulting services in regards to alchemy and practical science.

Abilities: Using the Philosopher's Stone; The Alchemist is capable of transmuting matter into new forms via contact either with his hands or feet. Enhanced mental cognition allows him to calculate and perform transmutations in an instant, while enabling him to create and utilize various tactical scenarios. Though one of the most powerful items in the world, it relies on a connection to life for the Philosopher's Stone to work, which is done by drawing the blood and spirit of the user, therefore, prolong or extended use of the Philosopher's stone without proper rest can drain all life from the user.

Manifest weapons from his clothing

Armor Mode (Turning his entire uniform into a suit of armor)

Enhancing his own body in one aspect, whether in strength or in senses.

Creation: Another character that was designed as a fan drawing of another established superhero, this time, Green Lantern. The plan was to make a fanfiction character as a new Earth Green Lantern, but then I went and changed it into the Alchemist as part of an upcoming comic startup company. The company didn't get off the ground, yet the character remained and I slowly altered and modified his look. Originally he had an elaborate costume with a long overcoat, my most recent revamp gave him a more cohesive pattern, yet the coat would have covered up the entire outfit, which is when I realized that I could simply combine the two to make a unique and distinctive hero look. Now, if I could finalize a color scheme, as my friends said my first color scheme was too much like Green Lantern, as I tried a mono-green color scheme. This character was entered into Stan Lee's Superhero contest at Talenthouse in January, yet didn't win. Even so, I still see some value in this and all my characters and I am proud to showcase him to everyone.