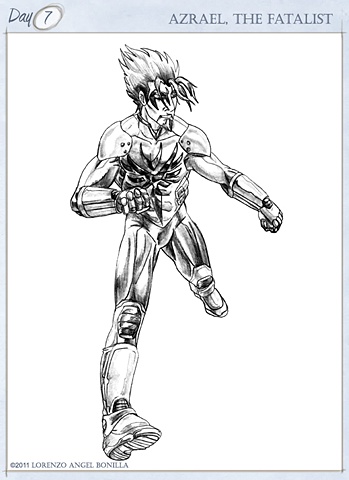 A superfast and aggressive hero; Azrael, The Fatalist.

Poor Lawrence Sandoval, he just got accepted into a networking internship for the Archangel Corporation, but unfortunately, was killed on his way to the main headquarters in a tragic plane crash. However, this was not the end of Lawrence Sandoval. For he, and several other individuals were used as subjects for Archangel's true business venture; superhuman and paranormal weapons research. Under Project: Immortal Weapon, Lawrence and several others were used as human hosts to house and entrap various Death beings to be used as the ultimate killing machines for Archangel's benefit. So, from that point on, Lawrence was made to be a host to a God of Death and was conditioned and made into a living weapon. Each human avatar was named based on which Death God they were host to; and forced into wetwork operations to escalate Third World conflicts and in the retrieval of occult artifacts.

The project's intent was to strip the human aspect and let the Death beings run shop, but Lawrence and a few were able to retain their humanity, while the sins of their work weigh heavily upon their conscience. It wasn't until the Deathgod Unit named Yama caused a massive breakout that Lawrence and every other horrific experiment created by Archangel was set free upon an unsuspecting world. Now back in Chicago, Lawrence has set up his operations in taking on threats too twisted for the police to handle and in uncovering any evidence as to the truth regarding Archangel. With the Angel of Death known as Azrael, Lawrence not only has to cope with another voice in his head, but also in insuring that Azrael's bloody nature doesn't overtake him. Though even with all this darkness surrounding him, Lawrence still maintains his dry and sarcastic sense of humor, as he was in his former life.

The Fatalist made his debut in the incredibly bloody encounter against the sadomasochistic killer known as Bloodrage, and has operated in dealing with the increased migration of Paranormals entering Chicago, even encountering with former Deathgod Unit such as Thanatos, Hades, and a particularly brutal encounter with Yama himself. Recently, Azrael is now connected with the formation of a superteam, calling themselves the Frontline. How this venture will turn out, no one knows.

Abilities: As a host to the Angel of Death, Azrael, Lawrence is endowed with enhanced strength and speed. Lawrence has enhanced reflexes that combined with his speed, make him one of the deadliest hand to hand combatants around. Lawrence also possesses a remarkable healing factor that can heal him from any wound or injury and makes him resistant to chemical agents.These abilities are typically constant, yet Lawrence undergoes a physical transformation, where his hair stands on end, eyes turn red, and his skin turns pale as markings come out of him in order for Lawrence to use the full extent of Azrael's power.

When severely injured or blacked out, Azrael will take for Lawrence and do battle for him. When this happens, Lawrence's face and hands are encased in his own blood, which hardens into a shell and converts into a horrific mask, which is the true face of Azrael, as winglike manifestations flow around Lawrence's body. When this happens, Azrael's speed increases dramatically as does his other abilities, along with a more aggressive attack style. Along with increased abilities, Azrael utilizes his own repertoire of moves, such as sprouting wings for flight, casting black fire and ice spells,and manifesting a bloody sword to fight with. Azrael has told Lawrence he, too, can use his abilities if he only let him " take over" more.

Creation: Azrael, The Fatalist was originally called Fate. He was also originally based on The Crow and Sting's Crow persona from pro wrestling. This was a creation I did back in high that orignally just looked like a Crow ripoff, until I used the Super-Sayan hair raising technique and implemented more ring attire into his look, as seen in that his boots were actually wrestling style kickpads. Even his backstory went through numerous revisions, with the Weapon X analogue being the main staying point of him, as well as making him a Hispanic character, which isn't his core identity. As for the symbol, I did it once during a challenge to make various tribal symbols, and I liked the look of this particular one and used as his emblem, along with other projects as a friend of mine once cited that symbols that use constantly will have a sense of power to you, and I decided I could tie it into the former logo of the Archangel Corporation as Fate stole the armor from them. Another thing I want to mention is that the name change occurred as I was brainstorming to change the name in conjunction with the Death God naming, yet I wanted to tie into his former name as well as the dark nature of his character, hence the Fatalist.