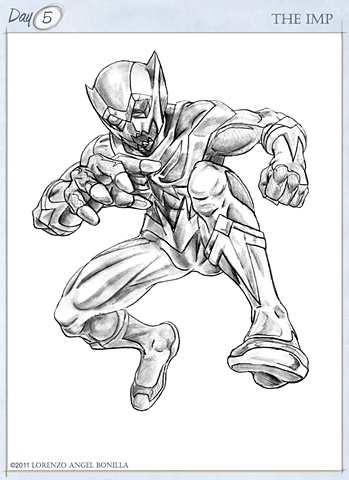 The Imp is a mischievous thief who is notorious for causing pranks during his crime spree and has a reputation for being extremely difficult to capture. This acrobatic troublemaker is not only infamous for his criminal pranks, but famous within the public school systems as a rebel within the Establishment. Even the heroes in the Superhuman community find it difficult to apprehend him as his crimes usually end up with the object returned after a number of days, plus the publicity backlash that comes with any hero who attempts to arrest the Imp. His crimes seem based on the the simple fact that The Imp is looking for a challenge to his skills and once he succeeds and claims his quarry, he sees no further point in keeping the object of his affection.

- Stealing the Millenium Park’s Cloud Gate (The Bean) and replacing it with a Giant Inflatable Bouncy Castle, full of Beans.

- Disrupting the Bank of America Marathon by introducing laxatives into the runner’s courtesy drinks, while he infiltrates the corporate headquarters and, I kid you not, rearrange the office furniture while taking the list and emptying out the accounts of several of the wealthiest people within the City.

- Stealing the Lion Statues at the Art Institute, and if that wasn’t incredible enough, made a mock sculpture of it with a series of stools and kitten plushies.

- Released fireworks within the United Center during a Bulls Game, activating the sprinkler systems (which were filled with paint) and amidst the chaos, stole the mascot costume of Benny The Bull.

Abilities: The Imp is an amazing acrobat, demonstrating skills of an Olympic Class athlete, while showing elements of parkour and free-running to increase his evasive ability. The Imp also carries a numerous objects to aid in his crimes from smoke bombs to grappling hooks, even a special “Taser Touch” where the Imp’s hands set off a charge, stunning his obstacles. The Imp has also demonstrated the ability of climbing and clinging to any surface, possibly due to either his Electrical Gloves, or a preternatural ability.

Design: This is actually more of a recent creation, as I rummage through various costume concepts and was intrigued by a Spider-Man concept with the padding, so I played around with the design and combining the agility and creating a monster persona around the outfit, I created the Imp. His methods and personality seem more of a “off the top of my head” type of writing and it works for this character, as I now do see him more as a Neutral type who operates as a villain type, yet due to his persona as more of a prankster than a malicious supervillain,The Imp belongs in that rare “tweener” category in wrestling where he does heelish acts, but is cheered by the public as a face.