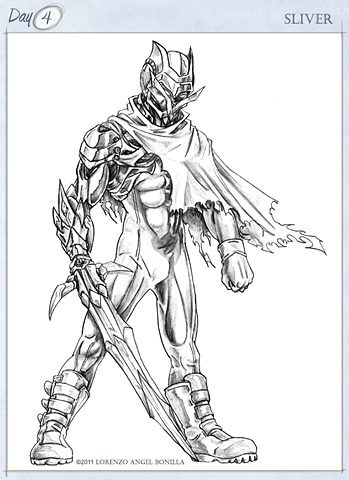 A mysterious and dangerous hunter, the enigmatic mercenary called Sliver.

Sliver was once a man who lost his arm in an archaeological site digging out a Medieval armory. Though lacking an arm, he managed to procure a strange gauntlet. This gauntlet, unbeknownst to him ,was one piece of a complete suit of enchanted armor of an ancient warlord that, legend has it, possessed a mind of its own. This gauntlet possessed the man and overtook his will to become the Hunter known as Sliver, whose only goal is to procure the remaining pieces of his Cursed Armor so that it can be whole again. He is currently in possession of at least two known components of the Cursed Armor, the Right Gauntlet and the Helm, which was taken from the Smitsonian and the cloak from the Field Museum.

While the Armor thefts are a concern, its the fact that whenever Sliver comes to to collect or follow a lead on a Cursed Armor piece, he leaves behind a trail of bodies in his wake, which makes Sliver a Most Wanted Superhuman in all law enforcement and federal government agencies. Sliver is also wanted as a top assassin due to his relentless pursuit of becoming complete, neither any opposition or reasoning will stop Sliver from achieving his goals.

Abilities: The Cursed Arm possesses metamorphic properties that encases its host in a metallic coating that protects the user from almost any known weapon. The hand is capable of extending its fingers into impossible lengths and are capable of transforming into various weapons, such as swords, spears, and hooks, for use in combat and defense, as pieces of the armor are capable of projecting spikes out of its exposed plating. The Cursed Helm is another addition that essential suppresses the host's identity and becomes its own entity, while providing the main means of speech and info in his search for his missing Armor.The Helmet also possesses the same metamorphic properties as the Arm. Sliver wears a kevlar woven bodysuit and the remnants of its previous wielders cloak.

Creation Notes: This character was inspired from me looking at a book on the Art of the Lord of the Rings Trilogy at a Barnes & Noble and saw a helmet from a list of concept sketches for Sauron, and this character stems from that one picture, while taking a nod from Witchblade regarding the weapon arm. The look and style changed throughout high school and I felt it was best to showcase this character. The pose is also based off a previous drawing of Sliver as that was my favorite pose for the character.