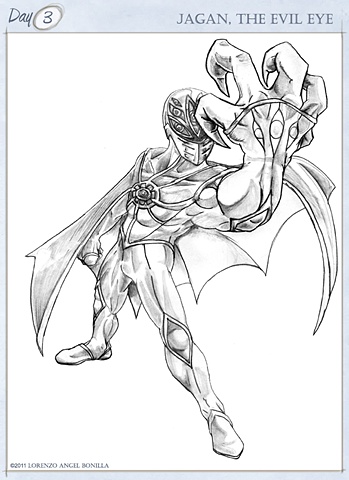 Now, from Dinosaurs to traditional Superheroes and Supervillains, comes Jagan, the Evil Eye.

A criminal mastermind, Jagan, the Evil Eye commits crimes either for profit or to instill his brand of terror across the city of Chicago, for profit. He runs an outfit of masked henchman called the Eyes, who are regular criminals who wear special masks that not only conceal their identities, but each mask is specially coated with chemicals that disperse a memory cleansing agent upon forced removal to ensure no one reveals the Jagan's true identity. Jagan also enforces control over his gang and with any other person via chemical compounds that Jagan disperses based on what operation he is going for. These gases can range from sleep to hallucinogenic. Jagan dispenses these compounds via wrist-mounted devices or through grenades. He enhances the effects via psychedelic strobe lights in his helmet that display a swirling mass of vivid colors and various eye patterns to convey The Evil Eye's state of mind. Jagan, The Evil Eye utilizes psychological warfare and fearful intimidation to incite fear and to unsettle the minds of his targets.

His secret identity is still a mystery, though some investigators suspected him to be local psychologist, Frederic Wolham, as he studied the effects of chemical compounds combined with disruptive stimuli on the human mind, yet the doctor was found murdered in his Lakeview home and his notes taken. Police have investigated all of Wolham's assistants with no possible suspect caught. Whoever murdered the doctor and stole his work is evidently able to use it with swift and deadly efficiency, as Jagan, The Evil Eye in his debut, once released a massive chemical hallucinogen during Grant Park's Lolapooloza festival, causing the entire downtown area to to break down into chaos, which the Tribune dubbed the event " The Night of Delirium"

So far, police and the Superhuman community has yet to capture Jagan, The Evil Eye and anyone who actually captures him is usually revealed to be just one of his henchmen, wearing his outfit and dies from an airborne pathogen created once unmasked. So, we are left with a chemical wizard who elusive as well as deadly.

Jagan's outfit initially started out as a sketch of someone's entry into a new Batman costume, and it was interesting to me because from a departure from most costumes, this batsuit was heavy on using crazy eye patterns on the helm. This led me to create the Jagan as I remade the style and piping over his outfit while experimenting with his helmet until I got the desired eye pattern I wanted his helmet to have. I wanted to base this villain in the vein of both Mysterio and The Scarecrow, in that I want a villain who employs chemicals and striking visuals to elicit fear, but also to mess with the minds of his victims to further his psychological torture profile. So, there you have it, beware the fearsome watch of Jagan, The Evil Eye.