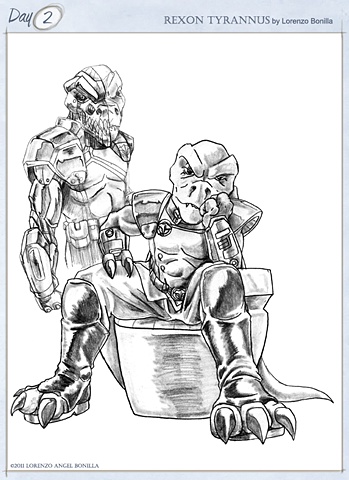 Every hero is only as good as their villain, and with Blazer, there comes his main enemy, Rexon Tyrannus. Tyrannus is the main antagonist to Blazer. A scientific warlord, Tyrannus has an entire mechanized army which he deploys to seize various territories from the Clan's homeland. The reason for this is tied into his family history, for years ago, Tyrannus's own ancestor was the first Unifier of all the Saurian tribes until they rebelled and ousted him out of power in a bloody war that led to the formation of the Clan Lands. The bloodline survived with each ancestor slowly plotting and planning a means to reclaim their lost legacy, with Tyrannus being the last known heir to the Tyrannus Bloodline and the one who enacted their revenge plot. Tyrannus sees this as a denial of his own legacy and feels entitled to reclaim these lands for his family honor.

I depicted him seated in his command chair, showing the regalia that a leader would wear. I also tried to depict his arms as shorter in relation to his body, as the gauntlets he wears serve as a means to wield specially crafted weapons for him to fire, while hiding a personal shield and energy blade within his gauntlets. Behind Tyrannus, like Blazer where I depicted his past incarnations; here I show his impending future of becoming a cyborg with implants while wearing a more militant uniform to support a more driven persona.

A scientific and military mastermind, Tyrannus was trained and taught the arts of combat and military strategy while indoctrinated the belief in family pride and in the history of the Tyrannus Family's Rise and Fall. He was given the collected knowledge and wealth of all the Tyrannus ancestors, deploying their plans and tactics while using a number of shell and clandestine operations to finance both his research and scientific endeavors.His attacks across the Clan Lands are focused on key lands that either contain a resource, new tech, or of strategic importance to Tyrannus's endgame; the complete and utter subjugation of the Saurian Race and the Decimation of the Clans. He rarely interacts personally unless a battle is truly important, as he is comfortable sending his machines to fulfill his ends, yet will hire or make arrangements with other Saurians if it serves his purpose.

Tyrannus isolates himself from the rest of the Saurian world due to a latent Animus ability; Psychic telepathy and telekinesis that he has little control and/or uses as a means of force or manipulation, making it hard for him to interact, yet also serving him as a lie detector when dealing with conspirators. Though his influence is vast, Tyrannus feels truly alone in his life with nothing left for him but to reclaim his stolen family honor and fulfill the Legacy of the Unifier.