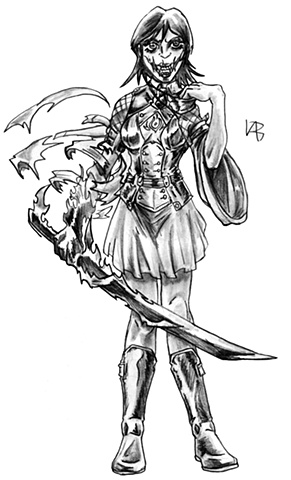 From Japan, and Urban legend that exists since the Edo period and resulted in a real-life panic, the Kuchisake Onna.

Called Slit Mouth Woman, this yokai appears as a young woman with either a kimono or a medical mask over her face, as is customary for prevention of spreading sickness while working. She approaches people and asks them "am I beautiful?" If you answer yes, she will remove her mask, revealing her slit mouth and asks again "Even like this?". If you say yes again, she will walk home with you where she will kill you with either a machete, scissors, or a katana, and carve your face with a slit mouth. Even answering no is an automatic death sentence as she disembowels you, while a yes answer ends in your face being carved in her image.

The legend has different stories where she is either a unfaithful wife of a samurai who was punished by having her mouth carved for her infidelity to being an extremely vain woman whose fixation with surgery resulted in a horrible accident that left her mouth scarred.

Along with her murder word game, the Kuchisake Onn is also said to run extremely fast and her legend was such, that it resulted in a panic in many communities.

To avoid her word trap, replying that she looks "so-so" our turning the question and asking if she thinks you are beautiful will confuse her, or leaving Japanese hard candy will distract her long enough for you to escape. She is also repelled by the smell of hair pomade.

My version of the Kuchisake Onna uses the modern, surgical maskversion with a dress drawn from my imagination while looking contemporary. The scarred is not unlike the one depicted on Heath Leger's Joker in the Dark Knight, save for the fangs. I made her murder weapon of choice as a manifestation morph from her hand from the tattoo starting from her chest and carrying over to her arm, resulting in her sleeve coming apart to create the weapon. For that, I chose the katana as a nod to its Edo origins and as a tool of irony for the husband who marked her, yet loose enough to become any other weapon she is described as wielding in order for her to make it a weapon of will.