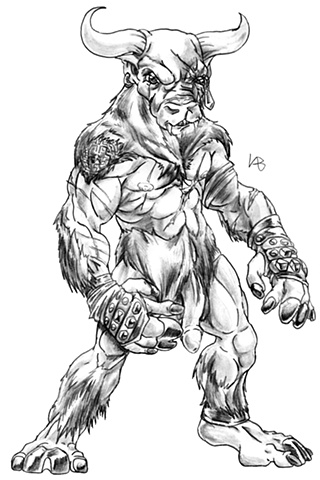 From Ancient Greece, a classic monster at the center of the Maze, the bull headed horror, the Minotaur.

For those who have not already heard the tale; allow me to tell it.

On the island of Crete, Minos was fighting with his brother for the throne. He prayed to the Poseidon, the Sea God, to send him a sign of support, which Poseidon did in the form of a white bull. Minos was supposed to sacrifice it in honor of Poseidon, but instead, kept the bull for its beauty and sacrificed one of his own bulls. To punish Minos for his offense, Poseidon had Aphrodite, the Goddess of Love, to make Mino's wife, Pasiphae, fall madly in love with the bull.

She desired the bull so much, that she had Daedalus, the Inventor, create a mechanical bull for her to hide in so that she may have sex with the bull. The resulting offspring is the Minotaur. Though raised in infancy, the Minotaur grew to be too ferocious to keep in the castle and desired to eat the flesh of man.

Minos, after receiving advice from the Oracle of Delphi, had Daedalus construct an elaborate maze outside his castle in Knossos. Here, the Minotaur was kept in captivity, with Minos, in revenge over the death of his son, Adrogeus, had Athens pay him a yearly sacrifice of 7 men and 7 women to be fed to the Minotaur. As we know, Theseus later joined in on this sacrificial ritual and through cleverness and the aid of Minos's daughter, Ariadne, Theseus conquered the maze and slew the Minotaur.

Now, for my version of the Minotaur. I actually did two versions of the Minotaur for a Western Lit class where I did a compare and contrast of the Minotaur from Ovid's Metamorphosis and Dante's Inferno. In those, I made the Minotaur a creature of abuse and neglect, which is shown on this version as I show scars and a bald patch where a tattoo of the maze is ingrained into his shoulder. I made more with its body by fusing the hooves with fingers and toes, while adorning rudimentary items on its person. Items such as the anklet, the earrings, and the cestus on his hands. And, yes, I did include a penis on this creature, its a force of rage and animal instinct, I think you get the picture.