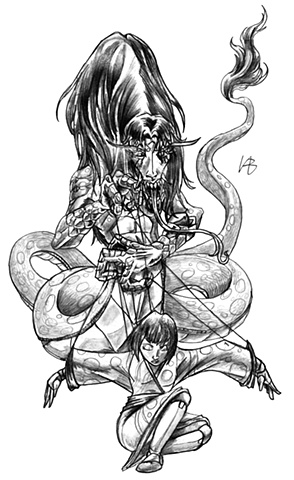 Off the coasts of Japan, comes Japan's own Medusa, the Nure Onna.

With the head of a woman with long, flowing hair and the body of a snake or dragon, The Nure Onna is one of the longest yokai, with a body going as long as 300 meters (984.25 feet). Her intentions are unknown, some say she is a predator that feasts on humans, some depict her as simply washing her hair and attacking those that disturb her, and some make her similar to the bull-like sea monster, the Ushi Onna, even making her his wife.

Her weapons include: -Sharp fangs and claws - A paralyzing gaze, similar to the Medusa, save for the stone turning - A long and flexible tongue - Her constricting coils - A trap where she poses as a woman leaving behind her child while she goes into the water to drown. When someone picks up the bundle, it suddenly becomes heavy, leaving the person at the mercy of the Nure Onna.

In my drawing of the Nure Onna, I was tempted to make her a mix of an angler fish and constrictor snake, but wasn't satisfied with the results. Instead, I depicted her as a master puppeteer, using a doll for her human trap while making her a snake woman with incredibly long hair, serving also as puppet strings. I followed a pattern style and facial structure from the book, Yokai Attack, while accentuating the serpent aspects on her eyebrows and forked tongue. I used different pencils for the shading and in detailing her scales and spots.