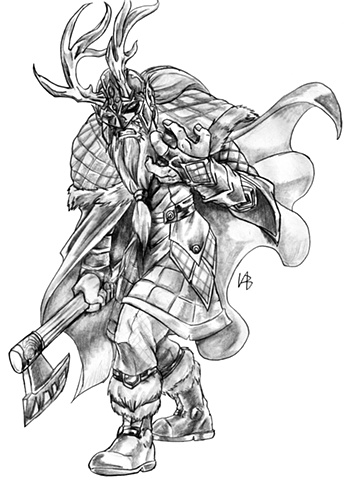 From Germany, a malevolent spirit created from a legend to poetry, the Erlking.

The original story, from Johann Gottfried Van Herder, interestingly enough, was actually about the Erlking's daughter, who tried to seduce a man on his way to his wedding and when he spurned her, she stricken him to die the following morning when he escaped her.

The version I am making is based on Goethe's poem, which focuses on the Erlking himself, who preys on children instead of people of the opposite sex. The story is about a child riding with his dad and freaking out over the strange sounds, to which the father makes rational explanations over the noises and sights that terrify the boy. This builds until the boy screams at being attacked, which prompts the father to ride faster to the hospital, where he finds his son dead.

This rendering of the Erlking plays more on it as a woodsman hunter over the wispy force in Goethe's poem. I also made the clothing slightly more fancy with detailed padding and his crown of antlers over a half -face helm. I originally wanted to give him a hunting spear, then a dagger, until I settled on an axe to contrast what elves typically wield. Add to the dramatic pose and you have a fearsome elven king.