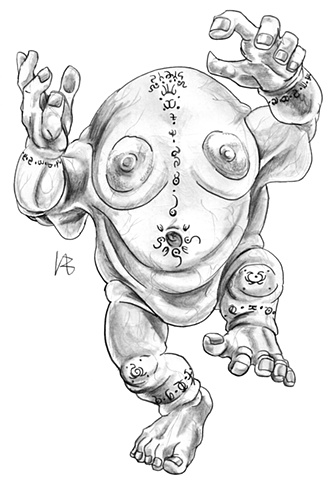 From Japan, the moving mound of flesh called the Nuppeppo.

This typically harmless yokai is found lurking around cementaries and old abandoned temples, where though frightening in its fleshy appearance, you are more likely to be repelled further by its repugnant stench over its grotesque appearance. Also, its flesh is said to grant immortality, but the cost is catching and eating a foul smelling piece of human-like flesh.

My version is basically playing up its fleshy blob appearance, with the nipples (suggested by my sister) as a place for the eyes, as the Nuppeppo body resembles a giant head. The markings are there for decoration.