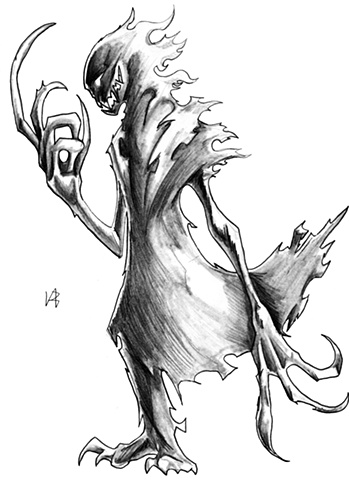 A shadow creature that attacks lone travelers, El Petizo often overwhelms its victims and would attempt to drag them away until it is spotted by rescuers, which causes it to disappear upon visual contact.

Several people have been treated and cited the El Petizo as the source of their injuries with its most famous encounter being a young travel getting knocked off his bike by El Petizo while he was hunting. When confronted, the boy fired a couple shots from his gun and then stabbed it with his knife, causing no damage and without a sound, El Petizo simply knocked him back and proceeded to drag him away, until the boys screams alerted another villager who rushed to his aid, and upon seeing it, El Petizo vanished.

Now, for this creature with its description as a living shadow, I just drew a shadowy wraith creature with long claws and using a jaguar skull for its head while blending in its figure and playing with shadows to make this figure extra creepy.