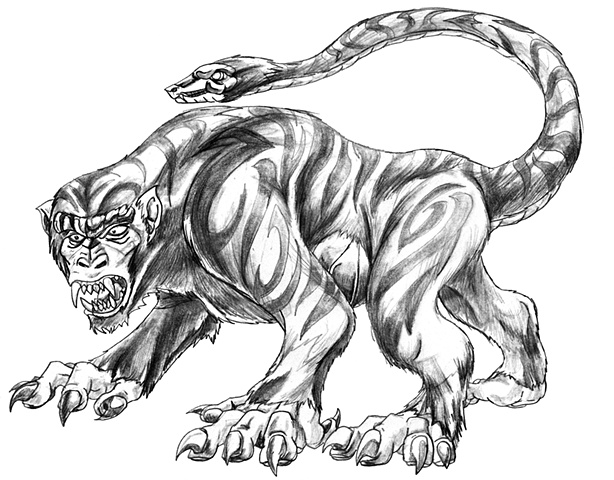 Sorry for the delays, expect some more images to be posted later in the day. I'll write a post explaining my lengthy delay later as well.

From Japan, comes their own Chimera, the Nue. The nue is a combination of a monkey's head, a tiger's legs, a raccoon-dog's body, and a snake for a tail. The Nue usually rides alongside storm clouds and capable of fiery breath.

The Nue is considered a bad omen as seeing one is a sign of impending illness or bad luck, though no one has officially came close to physical contact with the Nue. Though it possess a bevy of means of dealing great harm to your person, it has yet to do so to any person as its unsettling birdlike screech is enough to startle and drive away any humans.

For my depiction of the Nue, I stuck with the ape face and serpent tail while employing the body of a tiger as the components for the Nue. I made the clawed feet of a tiger and gave it the monkey's dexterity in its hands while giving the stripes all over its body. Plus, I gave the snake tail a fur overcoat to give it a consistent feature.