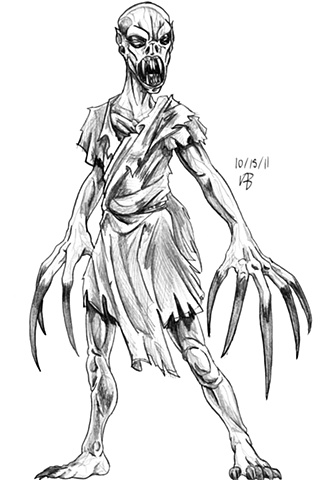 From Greece, a type of vampire that has a hunting season as unusual as its name, the Callicantzaro. This is a fusion Greek and Christian cultures, so it gets weird.

The Callicantzaro is a vampire that is active during the Holy Days between Christmas (Dec.25) and the Epiphany (Jan.6) . It was believed that any child born within said days will become a Callicantzaro.

During the tweleve day period, the Callicantzaro will roam the countryside and attack local villages at night, tearing and rending any victims apart with their long claws or take females to mate with underground. At daybreak, the sleep in caves. Once the twelve days are up, the Callicantzaro will return deep into the earth, sometimes Hades, to rest until the next holiday season.

This fear of any child born during those days to conduct a barbaric ritual in which they would dangle a child's feet over an open flame until their toenails singe as a preventative from turning into a Callicantaro.

Other stories say the Callicantaro is a form of Greek fairy that does pretty much what is described above, except for vampiric killing part, as they are described as akin to goblins in causing mischief instead of murder.

For my version of the Callicantaro, I did the vampire version but used the film characte,r Nosferatu, as a claw reference and making both hands and feet darkened with blood. I went through the trouble of brainstorming different head styles for it before settling with the classic bald head while destorting its eyes and nose as depicting a creature being in the dark so long would rely more on scent that sight. I also made its mouth like an open lamprey with exposed fangs and teeth while wearing tattered, Grecian clothing.