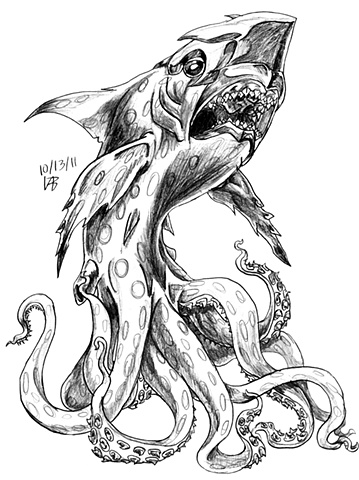 Ok, this one is an actual monster, but for everyone else, they will view it as from the Sci-Fi Channel movie, Sharktopus,which I did for that very reason.

From the Caribbean mythos, comes the sea monster, the Lusca. It is a creature reportedly seen of the Caribbean seas and is said to ensnare ships and drag them under, ala the Kraken of legend and other known tentacled sea monsters.

The Lusca is said to dwell within the Blue Hole areas of the Seas around the Bahamas, near the island of Andros. These "Blue Areas" around the ocean are vast networks of undersea caverns that existed during the Ice Age. This network of sea caverns connect between the freshwater and the Atlantic Ocean. These "Blue areas" are where the Lusca is said to dwell.

Reports of the Lusca's appearance vary between a mutli-headed monster,a dragon like creature, a squid-eel chimera, or the more popular shark- octopus hybrid; the sharktopus. Though the descriptions differ, its method of attack is still the same; it creates a whirlpool around its intended target and drags them under to its watery lair, where it feasts upon it unfortunate victims, with the remants of their sea vessel floating upward, and a pool of blood, but that's artistic license on my end. it drags ships, scuba divers, and even shoreline locals under the water, where the meet a watery end for any who reside or drop anchor near the Blue Holes.

Some scientists have suggested the Lusca legend may be more based on natural occuring whirlpools that occur around the Blue Holes of the Sea, and many sightings are often based on globsters, or decomposing sea carcasses that wash upon the shore, but are debunked as being Sperm Whale carcasses. However, the belief still persists of this mythical sea monster as the existence of giant squid and octopus will make the Lusca a viable creature.

For my rendition of the Lusca, I had to be an idiot not to draw the Sharktopus version of the Lusca. I gave it some plating around the nose and a combo of an octopus's beak and shark's teeth, altering the eye to be a mix of shark/octopus, using a type of squids suckers with points aaround the suckers for the tentacles, and some last minute spots around it to simulate its quasi-camouflage ability and som nozzles so that it can have the ink capability. I wanted this to be a true combo of a shark and an octopus, unlike the movie version, which I believe this version would slaughter the movie version.