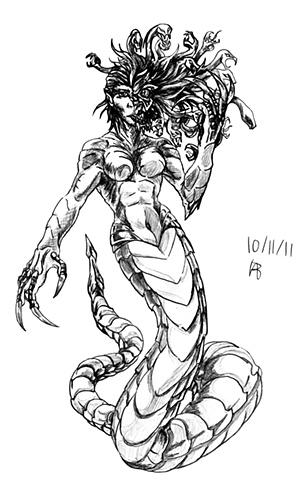 From Greek mythology, a classic monster from all myths and stories, behold the terrifying gaze of the Medusa.

Medusa, is a Gorgon with two other sisters, Stheno and Euryale, and daughter of marine deities Phorcys and Ceto. While early artwork depicted Medusa and her sisters as being born of monsters; in the Fifth Century, painters and sculptors began depicting Medusa as both beautiful and terrifying. She gained an actual origin from the poet Ovid in his Metamorphosis and we are given her backstory;

Medusa was a beautiful maiden, who served at the Temple of Athena. So beautiful was she, that she had many suitors, but due to her duties as a Maiden of Athena, she must stay chaste. Unfortunately for her, this did not stop Poseidon, the Sea God. Now, initially, the story said she and Poseidon had sex in Athena's Temple, but recent stories have depicted the act as a rape upon Medusa in Athena's Temple, and given Ancient Greek culture, its probably the latter. Enraged by this flagrant disrespect to her temple ( or having her hands tied, since she can't punish Poseidon, who is Zeus's brother and due to Zeus's Non-Aggression Proclaimation between Gods), Athena transformed Medusa into a the horrific creature whose very gaze, once the desire of many, into their bane as anyone who gazes at Medusa will be so overcome with fright, that they, literally, turn to stone.

From there, we get her being slain by Perseus, as she was the only mortal Gorgon. Perseus, who is motivated to slay Medusa out of saving his mother from being forced into marriage by King Polydectes. And from her blood, the Pegasus and the giant, Chrysaor. Her blood is said to create the coral of the Red Sea and birthing all the venomous snakes in the Sahara. After Perseus uses Medusas's head against King Polydectes and in saving his future love, Adromeda, from the Sea Monster, he hands the head over to Athena, who places it as the emblem of her shield, the Aegis.

Now, Medusa is creature that has spawned numerous interpretations and in theories based on ideas, such as Sigmund Freuds idea of Meduse representing castration;Nihilists viewing her gaze as representing Universal futility; and in Feminism as a symbol for Feminine Rage.

My ideal is that Medusa, is a tragic figure. A person who, represents a form of innocence and faith in serving her Goddess, then encountering her rape by Poseidon and transformation by Athena; the loss of her innocence and faith in her Goddess; only to, upon her death, serve Athena, which is either the affirmation of her belief or that upon her " tribulation" she is rewarded to return to serving her Goddess, i.e, restoration her Innocence. Now it may seem far-fetched, but, the Medusa head has often been used as a Protective symbol. Most famous of using Medusa's sigil was the conqueror, Alexander the Great.

Which brings us to my drawing of Medusa. I drew most of her body as snake-like, but didn't rely on the normal reptilian scales on the tail, yet added them into her skin during the shading process. The body was easy, somewhat, the tail was a challenge. In particular, the tip of the tail as I avoided including a rattle to it, as I don't think Ancient Greece was aware of Rattlesnakes, so I made it more like a skewer tip of the tail. Now, the real challenge was in her face. I wanted to represent that mix of fair and monstrous by drawing it in a half-face style, ala Two-Face. Now, instead of the obvious snakes attached to her head, since I was going to maker face transform from normal to ghastly, I made it so that the snakes are animated hair that transforms into snakes. So, this is the end of my interpretation of Medusa.