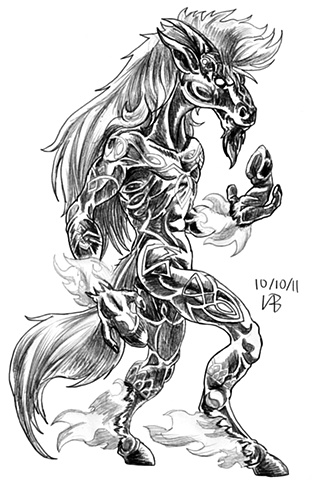 From Celtic folklore, most notably in Ireland, West of Scotland and Wales, comes the Puca, a fae that is feared throughout the lands, yet can still be strangely considered benevolent.

The Puca is an adept shape shifter that can take on a myriad of forms that can be pleasing or terrifying. They can be; - A rabbit - A goat - A horse (its preferred form) or - A goblin Not matter the shape or form, the Puca will have the same consistent traits in all its forms ,which are its black coloring and its luminescent golden eyes.

The Puca is capable of human speech and its most common form, a sleek black horse with a wild mane and glowing eyes, will offer humans rides which, if the human does ride the Puca, are guaranteed a wild ride, yet the Puca will do no harm to the rider, just leave them shaken. However, some folklorists say that Brian Boru, the High King of Ireland, was said to be the only successful Puca rider as he used a brindle made of Puca hair to keep it docile. Though it enjoys confusing and playing tricks on humans, the Puca does enjoy giving advice and in leading people away from danger, so it could also be a helpful fae being, but like all Fae, it is a trickster.

The Puca is still celebrated and spoken of in agricultural and regional traditions. On Samhain, the harvest festival, crops remaining in the field is considered "Puca" food and some regional farmers leave a portion of their crops for the Puca to placate the creature. November 1 (All Saints Day) is considered Puca Day, where the Puca is expected to behave civilly.

In the hill and mountain regions, there are stories of the Puca appearing on November Day to deliver messages and warnings to the citizens and is spoken with respect as if the Puca is pleased, the town benefits. Other areas celebrate the Puca in other forms like a great eagle, a boogeyman, a disfigured greedy goblin, and as a goat.

For my depiction of the Puca, I did something similar to its look like I did to the Tikbalang from last year, while keeping its black skin and incorporating some goat traits to its head like the horns and the chin beard. I gave it flames on its wrists and ankles to simulate the leg hairs on wild horses while making the mane and the tail go Super Saiyan level three in length while giving it an 80's style anime look. The final touch came in incorporating the "Celtic" markings on its body. I use "Celtic" in quotes as the authenticity is spotty at best from a quick image search. I used very soft leads on the body for its dark appearance and shading, while using a hard lead for the light flames, markings and hair detail.

The Puca has a minor personal significance to me, as when I started playing Magic: The Gathering, the Crag Puca was the first creature card I drafted during play and have been bugged by friends to draw this creature. I decided to today and I think I did it justice.