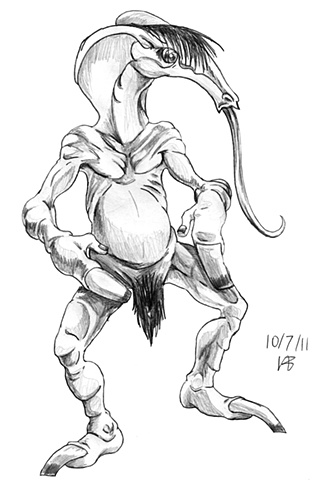 From Japan, a yokai that is actually doing a community service, the Akaname, or as its name translates to; The Filth Licker.

To better understand the concept of a bathroom eater, lets observe the layout of a traditional Japanese bathroom. For you see, most traditional Japanese housing has the bathroom and toilet in separate rooms, and in much older Japanese homes, the bathroom was made of wood and built separate from the house. Due to poor air circulation combined with dampness and humidity during baths, made the bathroom a home for many creepy crawlies, such as snails, slugs, spiders, worms, bugs, and toads. Plus the bathroom was generally very dark and spooky to go into, and with this fear of entering a darkened building, away from home, to take a bath, the Akaname was born.

The Akaname feed s on the mildew, soap scum, and dead skin cells left behind in bathrooms after prolonged neglect by their owners. So, if you leave your bathroom filthy, then you are likely to come across this disgusting fella lapping up the grime from eight months of buildup. In actuality, the creature is not known to be vicious to people and only seems interested in eating the filth left in bathrooms, so its actually quite helpful, albeit disgusting. The only fear one has of it is that it will continue coming back as it will view your neglected bathroom as a feeding ground and will come back for more, and once neighbors hear about you having visits from the Filth Licker, you can kiss your social standing goodbye.

To avoid an Akaname from visiting your bathroom, just clean it up. The mujina, orJapanese badger is also supposed to be a deterrent, as the Akaname is terrified of the animal, but its probably easier just to clean your bathroom than to have a live badger chained in your bathroom.

For my rendition of the Akaname, I kept some of its features from Seiken Toriyama and Tatsuya Morino's renders of it, which are the single toe, ridged skin, unkept hair and long tongue. My changes was making its head like an anteater while turning its ears into an expandable hood. I carried over the single toe aspect into its hands, as the drawing gave it human hands, so I originally was going to give four fingers, but went with two fingers as it worked better with the rest of it. I also went nuts with its ridged skin while giving it hair on its crotch to denote gender. The creature being generally harmless, I shied away from sharp claws and teeth and gave him blunted nails and the elongated mouth. Its my Jar Jar of the monster kingdom.