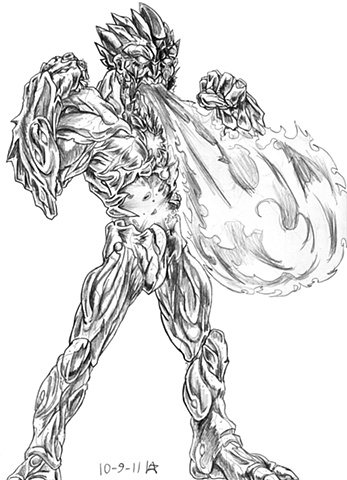 Son of Vulcan, the Fire God and Blacksmith of the Gods, Cacus lived in a cave on Palatine Hills. He feasted on human flesh and would nail the heads of his victims near the entrance of his cave. He was eventually defeated by Herakles (Hercules) by making the mistake of stealing Herakles cattle, which Herakles stole from another giant, Geryon. So, it was a vicious cycle of cattle rustling. Anyway, Herakles set the cattles to pasture while he went and took a nap. While Herakles snoozed, Cacus went and depending on the story, stole eight of Herc's cattle by dragging them by their tails or making the march backwards so as not to leave a trail. When Herakles awoke, he heard the cattle making a ruckus and seeing their heads aimed at a cave, Herakles went in search of his missing cattle. Frightened by Herakles, Cacus placed a huge boulder at the entrance to his cave, forcing Herc to tear open the top of his cave. Cacus pelted Herakles with his fiery breath, while Herakles tossed boulders and trees at the flaming inferno. Having enough of the fire and smoke, Herakles dove into the fiery hole and strangled Cacus so hard, that his eyes popped out of his head and their was no blood gushing forth, due to Herakles vice-like grip on Cacus's throat.

For my rendition of Cacus, I made him a living mountain of fiery fury, as Roman's visuals are essentially humans. I definitely wanted to depict him breathing fire, which I did. I used the Vulshok race from Magic: The Gathering to refine certain details on him while channeling my inner Guyver fanboy for the base of his body, in particular the feet and the tubes on his thighs. I tried different pencil styles, in particular the light areas to simulate glowing parts on his body as I did like the idea of an elemental type clashing with Hercules, or Herakles as he was called in Roman mythology.