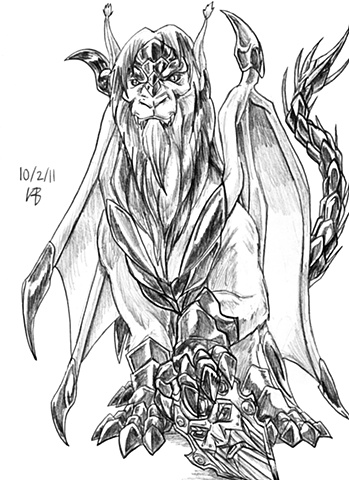 Originating from Persia, then lifted from the Greeks, comes the chimeric monster, the Manticore, a common monster trope for fantasy campaigns and artwork.

For my depiction of the Manticore, I used the lion's body and face while combining the dragon's armor plating, wings, and barbed tail. I also played on the idea that the Manticore is a leonin creature that is extremely obsessed with being human that they don human masks and adopt human mannerisms and customs that should a human call on their non-human appearance or see their true face, the Manticore will devour the offending human. I also wanted to create a gender type for feline bodies. human head creatures with the Manticore being male and the Sphinx being female. That's the line of thinking I was doing with my creation of the Manticore.