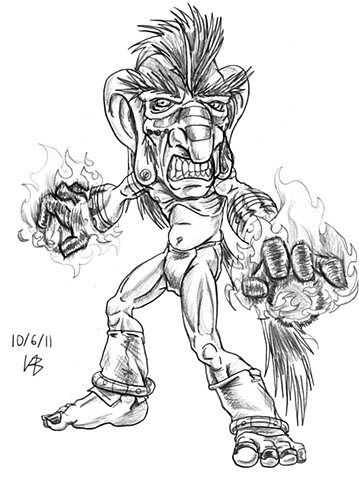 From Native American lore, or more specifically, Wampanoag folklore, is the Puckwudgie.

The Puckwudgie is a small, troll-like creature that resemble humans, but with enlarged features like ears, nose, hands, and feet.

The Puckwudgie possesses a myriad of special abilities, that include, - turning invisible - Sprouting quill-like extensions to resemble a porcupine. - Cast magic - Pyrokinesis - Able to make poison arrows - Can control little spirits called Tei-Pai-Wankas, which are believed to be the souls of Native Americans slain by the Puckwudgie

The Puckwudgies are extremely aggressive towards humans, due to jealousy towards the creation giant of Cape Cod, Maushop, favoring them. They tried helping humans, but their attempts backfired moreso than aided that the Puckwudgies decided to just torment the humans instead of aiding them. This caused the Natives to plead to Squanit, Maushop's wife, for help. She turned to Maushop, who simply tossed the entire Puckwudgie race out of Massachusetts. This did not deter the Puckwudgie, for they simply made their way back to Cape Cod and caused even more mischief, escalating from simple tricks and petty jokes to outright kidnapping, vandalism, and straight up murder. Maushop, sent his five sons to deal with the Puckwudgies, only for all five of them to be lured into a trap and shot to death by poison arrows. Enrage, Maushop went on a rampage, killing and scattering as many Puckwudgies as he could, only to have them regroup and lure him into a deep lake, where they pelted him with their magic arrows. The myths ending differs from either they killed Maushop, or Maushop just left out of grief for his dead sons, but lets be clear here; these creatures stood up to, and defeated a God, because the character Maushop, the Creation Giant of Cap Cod, no longer appears in Wampanoag mythology after the Puckwudgie encounter. So, in closing, we mere humans, are screwed.

The rules for dealing with Puckwudgies is simple; stay the hell away from them. If you see one, do not mess with them, they will follow you and make your life a living hell, and, they will kill you. Their modus operandi consists of kidnapping,pushing humans off of cliffs, pelting humans with spears, arrows, and knives, and simply blinding humans with sand. They are nasty creatures.

Recently, there have been reports of Puckwudgie sightings in Freetown Fall-River State Forest in Massachusetts, part of Wampanoag Tribe territory. In fact, several unexplained cliffside suicides are apparently linked to Puckwudgie lore due to their perchance of shoving people off of cliffs. Another park, Mounds State Park in Anderson, Indiana is a hotspot for Puckwudgie activity.

With all that info, lets get to the drawing. I used my basic idea of troll design while adding the spiky hair from the Puckwudgie's ability to sprout quill-like extensions. I selected the pyromancy ability as a visual for the creature as its dynamic and fun to do. Simple tribal markings and simple clothing, which is not authentic so don't go researching it. I merely gave them clothing as a means to show they are of a social order, but their troll-like features give them a link to Fairy Races, as well as make your own Gollum comparisons. I kept the enraged face for a race embittered by other deities, yet have no qualms of taking them on.