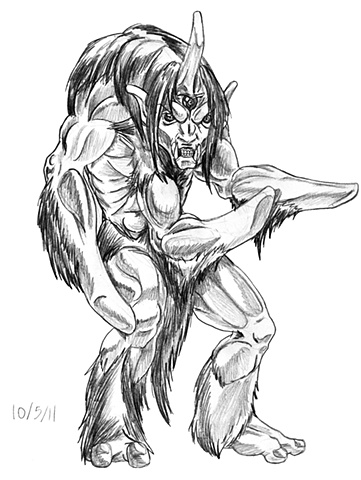 Existing in Cantabrian Mountain folklore in Norther Spain, The Cuegle is a fearsome monster that attacks humans and steals babies straight from the cradle.

The description is in interesting mix, as the Cuegle is describled as a small humanoid with black skin, three arms without hands or fingers, a single stubby horn, five rows of teeth, and three eyes. Each eye has a different color, One red, one green, and one blue. The creature is said to possess tremendous strength and is known to devour animals and babies.

To repel the Cuegle, one must place oak or holly around a cradle as a ward, since the Cuegle finds the scent repugnant, as it is a reminder of being fed such plants as a child by its mother.

When I drew the Cuegle, my challenge was the placement of the arms, as most would just place the extra one off the side whereas I placed the third dead center on its chest. I wanted a weird triangle symmetry with the triangle formation of its eyes and arms, as originally, I would've have the arm attached to the crotch. I kept the fur and the stumps, as it is interesting that a baby-stealer lacks the hands t grip something. I guess thats why it has great strength, so it could just bash into walls. Also, yes, I did think of the Guyver in regards to the forehead eye and in the horn's shape.