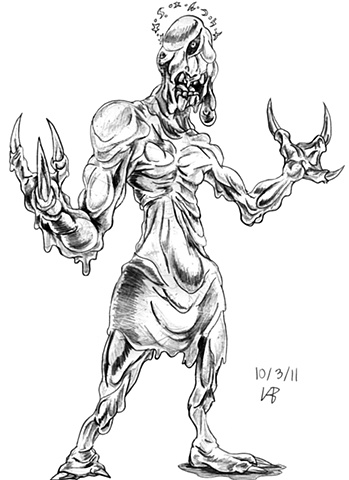 A yokai that can also play as a morality tale, the Dorotabo.

This creature lives in the rice paddies of Japan and comes out, according to Sekien Toriyama's Tales of Monsters, Now and Then, after the paddies are flooded and before rice seeding begins. It is, despite its horrific appearance of a mud monster with sharp claws and cyclopean eye, not a physical threat to humans. A threat to your sanity and peace of mind, however, is what the Dorotabo is disrupting as it is a restless yokai that wails and moans incessantly to poorly maintained rice paddies, crying "Return my field! Return my field!" until the break of dawn.

The possible stories to the origin of the Dorotabo are; A) An old man who buys a small plot of land and through hard work and determination, manages to make a livable rice paddy field and hoping his son will tend to it after he is gone.His son, however, sold the land in favor of wine and woman, thus disturbing his father's spirit and birthing this yokai. B) A farmer who was cheated out of their land and his restless spirit haunts the new owners. C) A pun based on indulging one's vices, for Toriyama uses the Dorotabo as a metaphor for the"pleasure quarters" in Edo castle, as a play on the sexual slang term " sticking a pole in the rice paddy."

For my version of the Dorotabo, I accentuated the mud monster more by playing with the proportions on its body. My design actually gives the creature legs, when in fact, the Dorotabo is generally a stationary creature and is only visible from the waist up. I gave it a more sunken in eye as opposed to a engorged eye, as again, playing up the mud monster feature. I also gave it a slight mystical halo, similar to my Gasadokuro drawing from last, as the Dortabo is the spirit of a disgruntled farmer, upset over the lack of care given to the rice paddy he worked hard on,