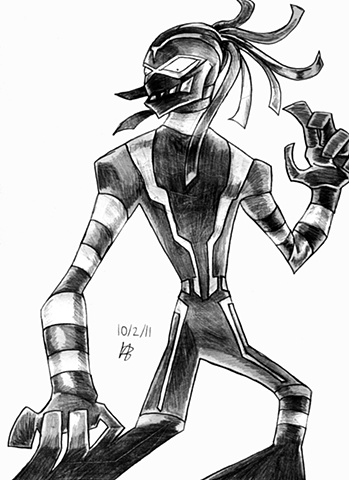 From Japan, the Nobiagari is a shadowy yokai that dwells anywhere humans live. This yokai is based on the idea of the sundail effect, wherein as the sun sets, the shadows grow longer. Described as either an ethereal shadow, an animal capable of growing or creating a large illusion, or posing as a Buddhist Monk, the Nobiagari often creeps up behind unsuspecting humans by inhabiting their shadows. When the human notices the Nobiagari and looks behind them,it grows exponentially, forcing the onlooker to crank their neck further and further back. This can either be it wanting the person to look so far up that they fall flat on their butts, or as a lull before the Nobiagari makes a lunge for the victim's throat. For added suspense, the Nobiagari would grow slowly to increase the tension from a suspicious human aware of its presence. If the human flees the Nobiagari, it will pursue them by simply stretching their elastic body to get close to the person, while menacingly leaning into their personal space. Though a Nobiagari is content with simply threatening humans, it has no qualms in inflicting harm upon a person.

To protect yourself from the Nobiagari,there are two ways of dealing with this yokai. One; is to stare directly at the yokai and slowly lower your gaze to the ground, for the being's size is determined by its intended victim's angle of view, so a downward angle will make a smaller yokai. Two; Assuming that the yokai is indeed a small creature casting a large illusion. Turn to face the Nobiagari, and kick into the air one foot from the ground, and you could possibly knock out the little spellcaster. This is, of course, it is a little creature and you didn't just kick a giant shadow in the shins.

For my depiction, I stuck with the growing shadow motif, and originally was making it a creepy shadow creature, but I did a rough sketch of it once and was modelling based on the illustration from the book,, Yokai Attack, and I liked the form of the illustrations, so I erased that creepy shade and made the more flatter version seen here. Though the added details are of my volition, as I wanted the patterns to form off its body as it rose higher from your shadow and looming above you. I used a 4H pencil for the lighter sections, while using HB and 2B for the shadowy portions of it. When scanned and cleaned, I adjusted the levels within its markings to have them stand out further from the rest of its body.