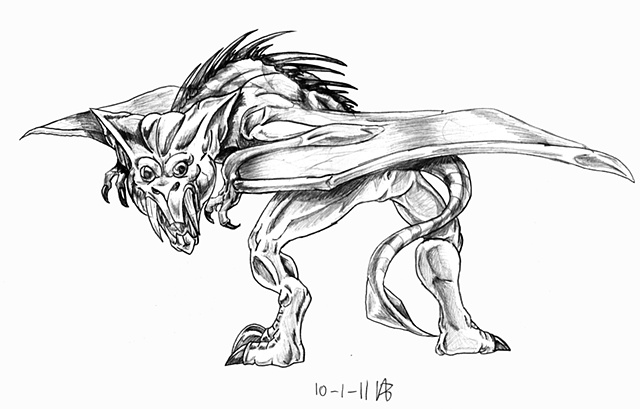 The Ahool is a crptid from Indonesia, on the island of Java, where there are plenty of reports and claims of sightings, yet not a single piece of solid or circumstantial evidence is found of this creature save from witness descriptions and the claim of the sound it makes, the "A Hooo!" sound from which it is named for. Based on here say, it is often described as either being a large bat or a giant pterosaur.

Skeptics believe the Ahool is, in fact, either the Spotted Wood Owl or the Javan Wood Owl, as both birds match most descriptions of it, makes the distinct sound, and are often intolerant of human encroachment and would make feint attacks up close to people that match often descriptions of Ahool confrontations. But, until then, its real to me dammit.

For my rendition of the Ahool, I played around with a giant bat, and then a giant pterosaur; ultimately going the Rodan approach and fusing the two together to make this leathery winged and fanged abomination. Plus, I traumatized my friends by pointing out that this is the first creature drawn with an actual anus. The head is a mix of bat with reptilian features, the pterosaurian wings, and the more bipedal gait over a more flight friendly form.