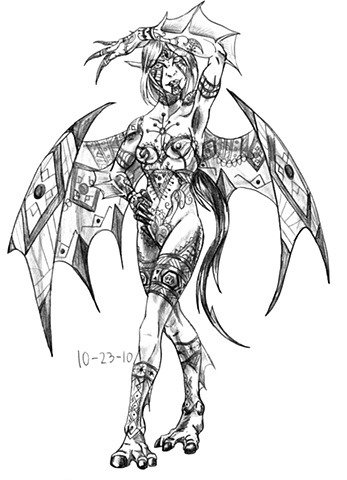 I put this up as there are two spellings to this creature, but I'm using what I hope is the proper name for it. This was a succubus reported in Morocco that I found out about on the Syfy show, Destination Truth, and combed the interweb for intel on this elusive djinn. From what I can glean from various sites, Aicha Qandisha is a seductive succubus, or water Jinniya (female spirit) that seduces men as not just taking their lifeforce via sex, but also using the male as a host to other demonic spirits, driving the man insane. This is the reason she is feared as she keeps her men as a pathway for spiritual traffic, like ley lines. She is also very possessive and won't leave the victim to ensure his openess, and upon spending time with her, crazed men will search the riverbeds seeking her out. Her description varies between attractive to old hag, from possessing goat to camel legs, and sporting wings.

For this drawing, I focused on succubus side of her and based on other images, her look is similar to other traditional succubi, so I had to take steps to make her stand out, as she is a popular spirit in Morocco. For her feet, I gave her the camel feet as they work in the desert environment. Her roots as being a water Jinniya are shown in a basic way by having fins appear on her limbs and I referenced and improvised henna markings to adorn her body and wings as to give her an illusory appearance of clothing, though she is, in fact, nude. The face I made serene with elven features, and markings done across her face and hair that is long and gives the hint of barbs within the hair. This is my second picture of making a sensual character and I think it works pretty well.