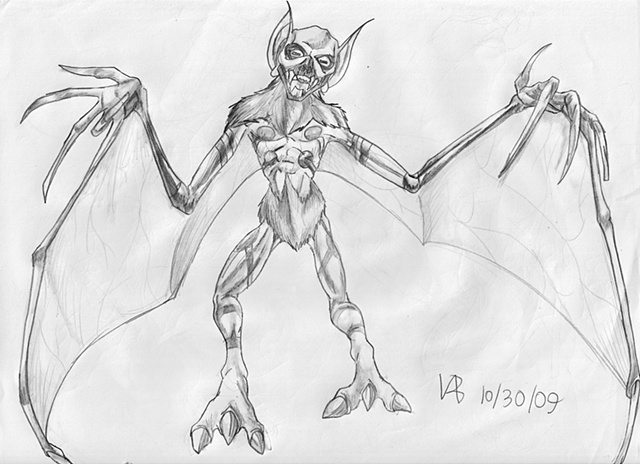 The vetala, or Baital; a vampiric entity from India that possesses the dead and torments people. Descriptions vary from tiny bat person, giant humanoid bat to emaciated corpse with inverted limbs. The creature is well known by this story, courtesy of the website,Bogleech;

" This creature is most famous for its role in "The Twenty-five Tales of the Baital", a collection of stories often compared to the Arabian Nights. In these tales, the legendary King Vikram is tasked by a great yogi to retrieve a corpse occupied by a Baital. After some struggle, the monster agrees to come with Vikram only if the King will remain silent. Unfortunately for Vikram, this vampire is a talkative one with a particular fixation on human folly. It presents twenty-five tales with twenty-five moral dilemmas, and ends each by asking the King if he can justify the character's actions.

For twenty-four tales, the King is unable to remain silent. He proudly and expertly defends human nature to the un-dead being, even knowing that he must begin the journey anew. The twenty-fifth, however, is a description of the future; a future where Vikram's own liberal way of thinking has been twisted into a world so amoral (by the standards of the time, i.e, women hold as much power as men) that he is at a loss for words.

At the end of their journey, the baital at last abandons the corpse (which reverts from an emaciated, monstrous form to that of a child) but not before revealing the yogi's plan to sacrifice our hero to his goddess, saving the King's life in return for "finally admitting" that mankind is, and always will be, inherently flawed."

Now, my drawing of it is essentially a humanoid bat with some form of inverted limbs and possessing various markings over its body. Not nearly as complex as the various descriptions made of the creature.